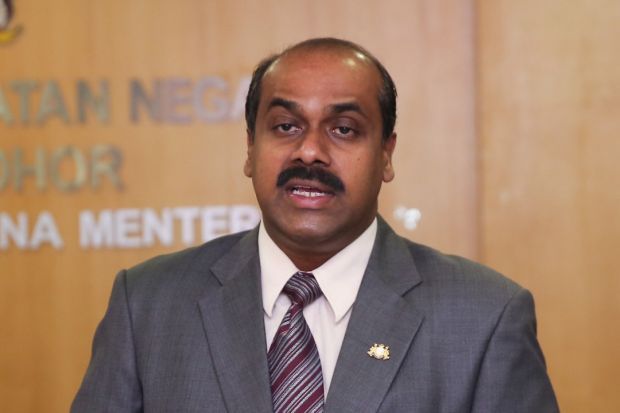 JOHOR BAHRU: The Johor Baru district has been declared a red zone after the number of Covid-19 cases surpassed 40 in the span of 14 days.

Johor health and environment committee chairman R. Vidyananthan (pic) said monitoring and surveillance efforts would be boosted because of an expected increase in the number of cases in the near future.

“The Johor Baru district was declared a red zone on Thursday (Oct 29). Based on information, most of the cases reported involved the spread of the disease among family members and at workplaces.

“Because of this, the state health department has placed the institutions involved under a home surveillance order.

“Ten new Covid-19 cases were reported on Thursday (Oct 29), including nine cases from existing clusters and one from other screenings,” he said in a statement here Friday (Oct 30).

Vidyananthan noted that there are currently three active clusters in Johor, namely the Bayu, Kempas and Rinting clusters.

“The cumulative number of positive cases for the Bayu cluster remains at eight as at Thursday, which involved three work colleagues and five of their family members,” he said, adding that 104 close contacts have been identified from the cluster.

Meanwhile, the Rinting cluster recorded 10 cases that involved two colleagues, six of their family members and two friends of their children.