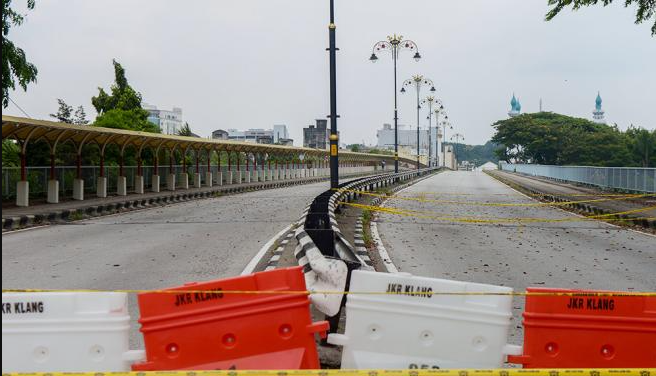 COVID-19 | Stay-at-home orders have been extended to four more districts – Klang in Selangor and Sandakan, Papar and Tuaran in Sabah – to curb the spread of Covid-19.

Beginning this Friday (Oct 9), only essential services and International Trade and Industry Ministry-approved manufacturers will be allowed to operate in these four districts.

However, the SOPs for the conditional MCO on Klang are yet to be finalised as the state-level National Security Council will only meet on this tomorrow morning, Selangor Menteri Besar Amiruddin Shaari said.

The restrictions will also follow the Health Department borders, which thus far is not publicly available.

Therefore, the conditional MCO on the Klang district may include parts of the Shah Alam and Setia Alam townships.

Further details will be announced later, said Amiruddin who will chair the meeting tomorrow.

Travel in and out of these areas will be restricted.

Dawn-to-dusk (6am to 6pm) operating hours will apply to eateries, pharmacies and convenience stores, while taxi and e-hailing services and petrol stations can only operate until 8pm.

All pasar harian will be allowed to operate from 6am to 2pm while all other types of markets including tamu and pasar malam will be temporarily banned.

Those wishing to work or travel must obtain permission from the police beforehand. Travel is only allowed for emergencies and official duties.

This order, referred to officially as a conditional movement control order (MCO), has no set expiry date.

The restrictions under the conditional MCO are:

– Not more than two persons in a vehicle.

– Eateries and convenience stores will be closed after 6pm.

– No travelling to work, unless in essential services. Police permission is required.

– Ban on all sports, recreation, social and cultural activities.

Its imposition was decided by the National Security Council this morning and announced by Senior Minister (Security Cluster) Ismail Sabri Yaakob at 4pm this afternoon.

Districts with more than 40 active cases are classified as “red zones”.

However, the tally does not include imported, interstate, or interdistrict cases.

If such cases are included, Petaling and Hulu Langat districts in Selangor and Kota Setar in Kedah also have more that 40 active cases but are not currently under conditional MCO.

Most of the Kota Setar cases are attributed to the Tembok cluster that has 1,186 cases so far.

The Health Ministry had said the cluster involved a prison population and is isolated from the community-at-large since the Alor Setar Prison is under an enhanced MCO.

Meanwhile, Ismail also announced that the police will henceforth issue summonses for MCO violations on the spot as opposed to taking the offenders back to a police station as previously done.