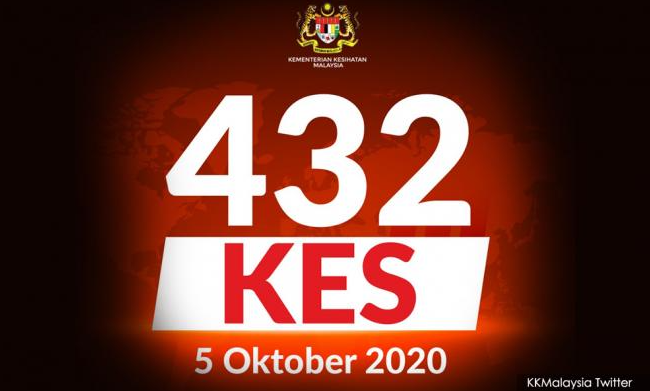 COVID-19 | A record-setting 432 new Covid-19 cases were reported as of noon today, while the number of patients in intensive care units (ICUs) continues to climb.

Every state and territory recorded new cases except for Perlis and Penang, with the highest being Selangor (34), followed by Kuala Lumpur (7), and Terengganu (5).

The current active caseload stood at 2,336.

Meanwhile, the number of patients who require intensive care has increased to 32, up from eight last Monday.

There were no new deaths attributed to Covid-19 reported today.

In Kedah, there were 241 new cases, of which 224 were traced back to the Tembok cluster, which involved an outbreak at the Alor Setar Prison.

There were two new clusters in Kedah – Bah Sintok (11 cases) and Jeram (3) – that were reported today.

The index case for the Bah Sintok cluster was a Malaysian male, 23, who returned to Kubang Pasu from Sabah on Sept 20 and developed symptoms two days later.

All the new Bah Sintok cases reported today were the result of screening close contacts of the index case.

The Jeram cluster also involved an index case from Kubang Pasu. The index case is a Malaysian female, 31, who reported symptoms on Sept 25 and was warded four days later.

Three close contacts who tested positive are all healthcare workers.

In Sabah, 57 new cases were detected from the screening of individuals with Covid-19 symptoms, while the Bangau-Bangau cluster contributed another 39 cases.

In Selangor, 17 new cases were detected among people with travel history to Sabah.

However, both clusters have spilled into Kuala Lumpur, registering two new cases each.

In Terengganu, there is a new cluster known as Bah Tanjung with three new cases. Two other cases in the state were close contacts with Patient 12,082.

The index case for the Bah Tanjung cluster is a Malaysian male, 46, who returned from Semporna, Sabah on Sept 27 and reported symptoms the following day.

There are currently 13 active clusters in the country. The cluster with the most active cases is the Tembok cluster (Kedah, 652 cases), followed by the Bangau-Bangau cluster (Sabah, 376) and the Benteng LD cluster (Sabah, 231).

It should be noted that the Tembok and Benteng LD clusters involved jails, thus are isolated from the public. However, some of the cases have involved prison staff, and social contacts of prisoners or prison staff.

The biggest cluster in Selangor is the Jalan Meru cluster (48). However, this cluster has spread across Peninsular Malaysia, reaching 11 districts.

The Klang district has the highest number of active cases (57) in Selangor, followed by the Petaling district (48) and Hulu Langat (38).

Keep up with the latest information on the outbreak in the country with Malaysiakini’s free Covid-19 tracker.

Malaysiakini is providing free access to the most important updates on the coronavirus pandemic. You can find them here.