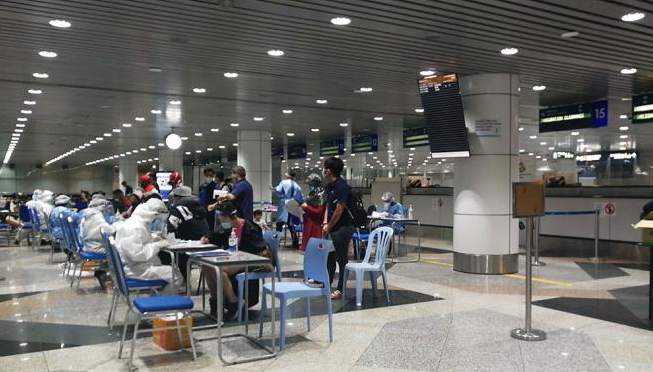 COVID-19 | Malaysia reported 89 new cases of Covid-19 in the 24 hours up to noon today of which 86 were locally acquired infections while three were imported cases.

He started experiencing Covid-19 symptoms on Sept 21 and was brought to the Emergency Department of the Sultanah Bahiyah Hospital in Alor Setar for treatment on Sept 28 after having breathing difficulties.

He died at 6.15pm the same day and a Covid-19 test found the deceased was positive for the coronavirus.

Noor Hisham said 169 people have been tested in the Tembok cluster so far, 166 of which are still pending results. The source of the infection is still under investigation.

He was then brought to Tawau Hospital’s forensics unit and tested positive for Covid-19 on Sept 29.

Amid the fatalities, admissions to intensive care units (ICUs) grew for the third consecutive day from six cases on Sunday to 16 today.

Eight of the ICU cases are from the Bangau-Bangau cluster, while the Sungai and Pulau clusters have one ICU case each.

The new cases bring Malaysia’s total Covid-19 caseload to 11,224. A total of 28 patients have recovered from the disease and were discharged.

Meanwhile, nearly all states and federal territories reported new Covid-19 cases with the only exceptions being Malacca and Putrajaya.

Noor Hisham said that out of the 86 locally transmitted cases, 25 had a travel history to Sabah. That brings the total number of cases involving travellers returning from Sabah to 88 cases since Sept 20.

Sabah itself recorded 35 infections today, of which 18 were detected during screening of patients showing symptoms of the disease.

Another nine cases were detected in the Bangau-Bangau cluster in Semporna.

So far, 458 people have been tested in the cluster, of which 287 were positive, 51 were negative, and 120 are still pending results.

This gave the cluster an unusually high positivity rate of 84.9 percent, which indicates the level of testing for this cluster is still inadequate.

Noor Hisham had said yesterday that the ministry will intensify its efforts on the Bangau-Bangau cluster.

Meanwhile, four cases have been detected in the Benteng LD cluster centred on Tawau and Lahad Datu. Tests have been conducted on 11,846 people from this cluster thus far, of which 879 were found positive and 1,620 are still pending results.

Contact tracing for Case 10273 found another three people infected in Sabah, while another case was the aforementioned Case 11185 who died it Tawau.

One case was reported in the Sungai cluster. Some 25,406 people have been tested in this cluster so far, with 100 of them receiving positive results and no tests pending.

Selangor recorded 10 new cases, half of which were detected during screening for travellers returning from Sabah.

Another five cases were found during screening for various reasons:

Johor reported eight cases today, seven of which are part of the Bakawali cluster in Johor Bahru, bringing the total cases in the cluster to 11.

Six of the new infections involved Case 10911’s colleagues, while another involved the wife of one close contact to Case 10911 who was earlier reported to have tested positive.

The other case in Johor was detected during the screening of travellers returning from Sabah.

In Sarawak, four cases were found during the screening of travellers returning from Sabah, and one case involved a traveller from Peninsular Malaysia who tested positive during screening at an international port of entry.

He said Case 11132 had travelled to Sabah from Sept 19 to 22, and then came into contact with the two relatives between from Sept 22 to 28 before being warded after testing positive for Covid-19 on Monday.

The following states and territories only reported cases that were detected during screening for travellers returning from Sabah:

Meanwhile, the Health Ministry announced that it has ended its monitoring of the MV Glen cluster after no new infections were reported in 28 days.

The cluster involved crew members of a ship docked in Port Klang and infected three people, but fatalities were reported.

The MV Glen cluster is the 100th cluster to have ended its monitoring period, but there are still 24 clusters considered active.