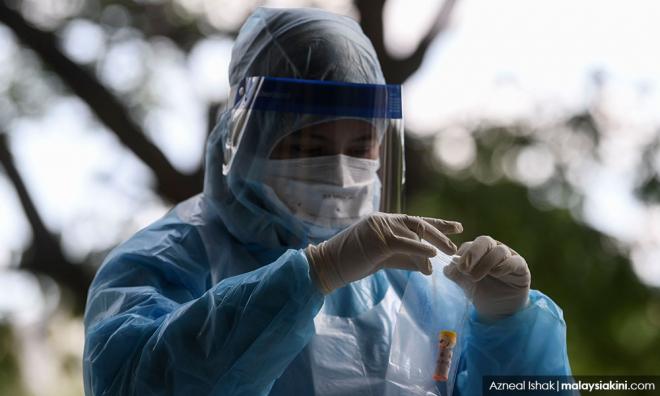 COVID-19 | The Health Ministry has recorded 52 new Covid-19 cases as of noon today, of which 40 were found to be locally transmitted cases including 36 in Sabah.

They also discovered a new infection cluster in Penang, involving a man who tested positive during a screening exercise upon his arrival at the Sandakan Airport in Sabah. A Penang-based relative of his has also since tested positive for the virus.

According to Health director-general Dr Noor Hisham Abdullah, the increase of 52 new cases was against 40 patients who had fully recovered from the virus as of noon today.

“The new cases bring the total number of Covid-19 positive cases in Malaysia to 10,219 cases.

“Thus, the number of active cases with the ability to spread infection has now come to 734 cases. All of them have been isolated and given due treatment,” he said in a statement.

Of the 12, eight of them had arrived from India, and one each from Indonesia, Bangladesh, Yemen and Russia.

On the local cases, Noor Hisham said 36 were recorded in Sabah, of which 27 were traced back to the Benteng Lahad Datu Cluster.

Fifteen of them are Malaysians, while the rest are foreign nationals. MOH did not provide the specifics of the 15 Malaysians tested positive and how they were linked to the other cases.

“With the 27 new cases, the total positive individuals linked to this cluster is now 578 cases.

“So far, as of noon today, MOH has performed screenings on 8,627 individuals in this cluster,’ he said.

For the record, Benteng Lahad Datu cluster was first detected in early September, and was traced back to two migrants who were detained at the Lahad Datu police headquarters lock-up facility. It had since spread to the Tawau Prison and Sandakan.

Noor Hisham said that three other new cases were detected in Kedah, and another in Penang.

The cases in Kedah, he said, were found during MOH screening exercise carried out on the community in Kota Setar, which has been placed under the administrative enhanced movement control order (MCO). All three are Malaysians.

In Penang, the one case found positive there was connected to a new cluster called the Ara Cluster.

“The index case of this cluster is a 44-year-old Malaysian man who was found positive of Covid-19 during screening at the Sandakan international entry point in Sabah on Sept 15, 2020. The test was done upon the man’s arrival from Peninsular Malaysia.

“Following this, a close contact screening exercise was carried out, and one positive case has been identified on Sept 19. This positive case is a niece of the index case,” Noor Hisham said.

MOH had since conducted tests on 14 other individuals. Their results returned negative.