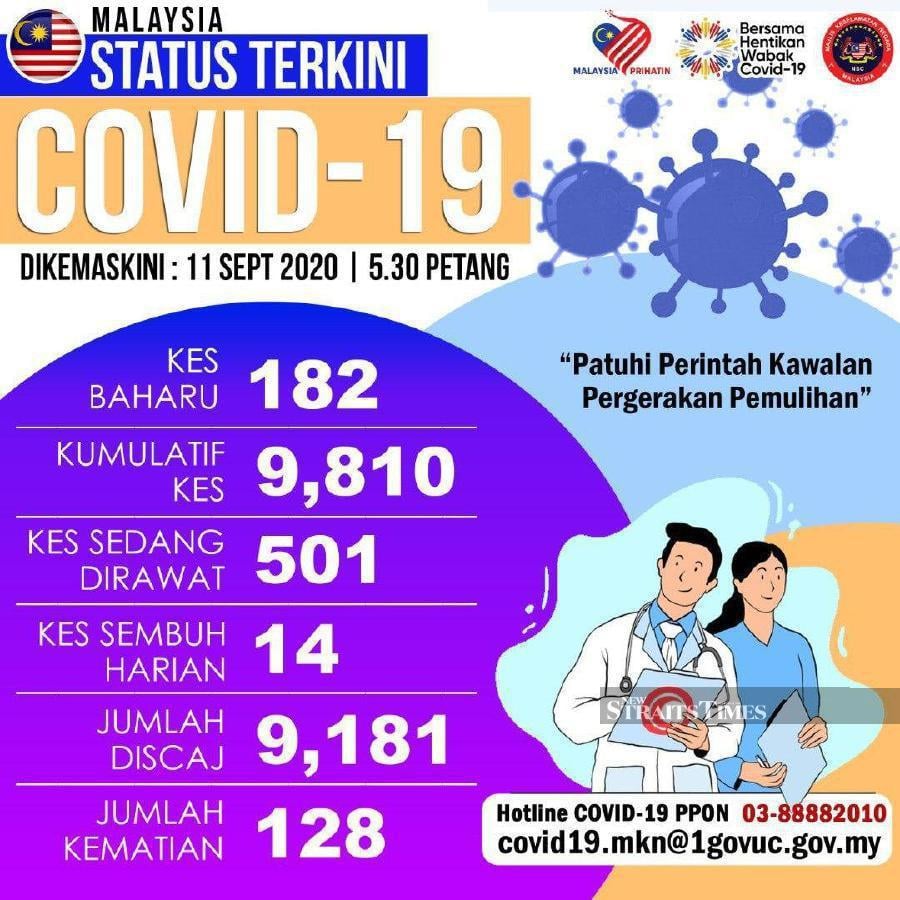 KUALA LUMPUR: Malaysia’s Covid-19 numbers continued to soar today with 182 cases recorded within a 24-hour period, an overwhelming majority of which were local transmissions.

Only one was an imported case, involving a Filipino in Selangor who entered the country recently.

This also marked the highest number of new cases reported in a single day since the Recovery Movement Control Order (RMCO) came into effect on June 10.

Prior to today’s 182 cases, the highest number of daily cases in the RMCO period was 100, recorded on Sept 8.

The Benteng cluster in Sabah, which sparked from a Tawau prison and the Lahad Datu police headquarters, remained the largest contributor of new infections with 167 cases.

The cluster was initially identified on Sept 1 when two undocumented immigrants were detained at the Lahad Datu district police headquarters lock-up on August 24. The detainees later tested positive for Covid-19 on Aug 31.

The other 14 cases were from the Sungai and Telaga clusters in Kedah and Perlis.

The index case of the Sungai cluster was a staff at a medical centre in Kedah, who became infected with Covid-19 and subsequently infected seven other family memberrs.

A total of 501 cases with infectivity have since been isolated and are undergoing treatment.

Commenting on the Benteng cluster, he said 2,837 people were have been screened so far.

“From the 167 new cases, 76 are Malaysians, with 70 being prison convicts. The remaining six are members of the public who were detected via close contact tracing.

“The remaining 91 cases involved foreigners from the Philippines and Indonesia, with 61 and 30 cases, respectively.” ” he said.

As for the Sungai cluster, 2,170 people have been screened. From the total, 2,037 people were screened in Kedah, with 11 new positive cases detected.

He said the situation of the clusters and areas under the administrative Enhanced Movement Control Order (EMCO) would be updated accordingly.

He also noted that no new fatalities were reported, with the death toll standing at 128 cases, making up 1.30 per cent of the total cumulative cases.

Nine people, he said, were are being treated in Intensive Care Units with five requiring breathing assistance.