KUALA LUMPUR: Malaysia recorded a staggering hike in the number of new Covid-19 cases today at 62, of which 50 cases are from the Benteng LD cluster in Sabah.

This is a huge jump from yesterday’s (Sunday) six.

“This cluster was identified on Sept 1. It (infection) began with two illegal immigrants who were detained at Lahad Datu district police headquarters lock-up on Aug 24. 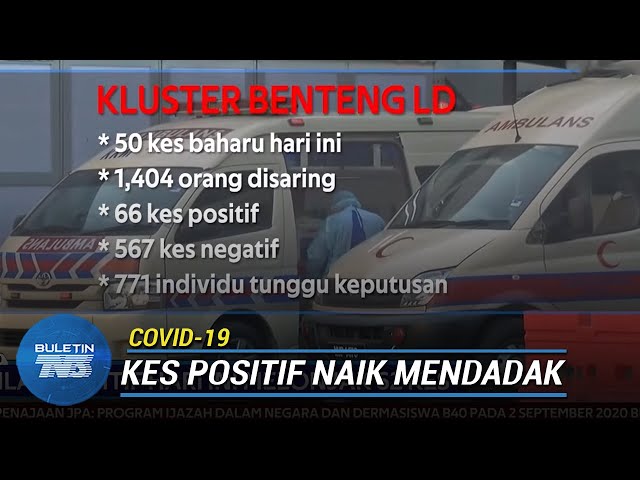 “The duo was later confirmed positive for Covid-19 on National Day. They have since been admitted to Lahad Datu Hospital,” Dr Noor Hisham said in a statement today.

Sixty-six had since been tested positive.

“The positivity rate stands at 4.7 per cent. Out of the 66, 64 are inmates while the remaining two involve a prisons department officer and his relative.”

“This is the main contributor to the transmission of Covid-19 infection among prisoners, which hampered the practice of physical distancing.

“Adherence to the standard operating procedures is important and should be practised at all times regardless of location,” he said.

He said the cluster had affected the districts of Lahad Datu and Tawau.

“A total of 420 screenings have been conducted in Lahad Datu – 50 positives, 337 negatives and 33 awaiting results.

Apart from the 50 in Sabah, the remaining cases were six local transmissions and six imported cases involving two Malaysians and four non-Malaysians who had flown in from Turkey, Bangladesh, Indonesia and Egypt.

Local transmission cases involve four in Kedah, one in Penang who had close contacts with Case 9,397 and a patient who was tested positive during a severe acute respiratory infection screening at Lahad Datu Hospital.

In Kedah, a new cluster called “Sungai” saw two new cases; the first originated from the Telaga cluster while the second case was detected at a dental clinic in Alor Star.

Nine cases had recovered and been discharged from hospitals. There are six patients currently being treated at intensive care units with four requiring breathing assistance.

No new fatalities were reported today, keeping the death toll at 128.