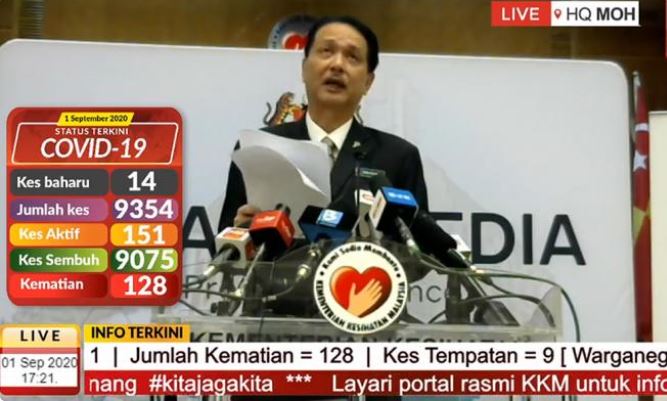 COVID-19 | Malaysia has reported 14 new cases of Covid-19 in the 24 hours up to noon today, including an outbreak at a police lockup in Sabah.

In addition, a second patient has died of Covid-19 in the Tawar cluster in Penang, making this the third death recorded in four days.

At a press conference in Putrajaya today, Health Ministry director-general Dr Noor Hisham Abdullah said that of the 14 new cases, nine were locally-acquired including seven in the newly detected cluster.

“The Health Ministry wishes to inform that a new cluster has been identified as a result of screening of new detainees at the Lahad Datu district police headquarters, Sabah.

Noor Hisham added that those who tested positive did not show any symptoms and have been admitted to the Lahad Datu hospital.

The patients in the new cluster dubbed the “Benteng LD Cluster” comprise six undocumented migrants and one Malaysian citizen.

Meanwhile, the two other local cases were both detected in Kedah – one involving the Tawar cluster, while the other involved the Telaga cluster.

“Case 9353” of the Tawar cluster involved an 11-year-old girl who was detected during screening of areas under a targeted enhanced movement control order in Sungai Petani.

As for the newly reported death, Noor Hisham said the deceased (Case 9174) was an 80-year-old woman with a history of lung cancer and high blood pressure who tested positive for Covid-19 on Aug 14.

Charts issued by the MOH show that she had stayed at the same private hospital in Penang where “Case 9129” was being treated for a wound infection before the ministry’s contact tracing teams alerted the hospital to the fact that “Case 9129” was a close contact of the Tawar cluster’s index case.

According to Noor Hisham today, the deceased had symptoms of fever and chest pains since Aug 6 and was admitted to an unnamed medical centre. She was transferred to the Penang Hospital upon testing positive for Covid-19 on Aug 14.

“Her health deteriorated due to complications from lung cancer and she needed ventilator support since Aug 24. She was confirmed dead on Sept 1, 2020, at 10.38 am,” he said.

There are still five Covid-19 patients being treated in intensive care units in Malaysia, three of whom require ventilator support.

As for the imported cases, Noor Hisham said they originated from Ukraine, Pakistan, Indonesia and the Philippines, all of whom are non-citizens.

The new reports bring Malaysia’s total number of Covid-19 cases to 9,354 so far. A total of 21 patients recovered today and were discharged. The death toll is now at 128 cases.

There are 151 cases that are still active.

As for testing, Noor Hisham said 58 laboratories throughout the country had the capacity to conduct 38,304 tests per day as of Aug 31.

He said that 6,664 tests were conducted yesterday, but the data was incomplete because some private and university laboratories had yet to submit negative test data.

For the Tawar cluster, Noor Hisham said 17,880 people had been tested so far up to noon today, of which 75 tested positive and 1,418 test results still pending.

For the Telaga cluster that has six confirmed cases far, Noor Hisham said 1,008 people have been tested and 33 are still awaiting their results.

“Active case detection and contact tracing are still underway for both clusters,” he added.