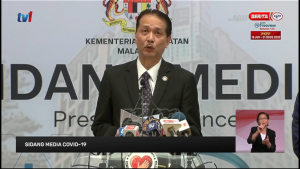 PUTRAJAYA: Malaysia recorded 10 new Covid-19 cases on Sunday (Aug 23), bringing the total number of infections to 9,267 cases, according to the Health Ministry.

Dr Noor Hisham said of the 27 Alam cluster-linked individuals screened so far, seven had tested positive while 18 tested negative and two others were awaiting their results.

The Alam cluster was detected in an oil tanker in Bintulu when four positive cases were reported on Thursday (Aug 20).

He added that contact tracing for the locally transmitted Tawar cluster was ongoing, saying that 3,286 individuals from Kedah, Penang and Perak had been screened so far.

The total number of Tawar cluster cases increased from 63 the previous day to 65 as at noon Sunday.

He added that 10 patients have recovered in the last 24 hours, with a total of 8,959 patients discharged since the Covid-19 outbreak began in the country.

There are currently 183 active cases that are being treated at the country’s health facilities.

Nine patients are being treated at the intensive care units (ICU) with four of them on ventilator support.

There were no deaths reported on Sunday, with the death toll remaining at 125 or 1.35% of all cases.