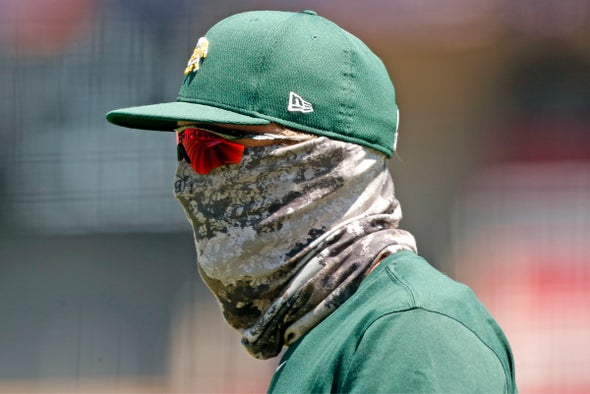 In the U,.S., “…community outbreaks of the coronavirus this summer have centered on restaurants and bars, often the largest settings to infect Americans,” writes Jennifer Steinhauer at The New York Times (8/12/20). Data show that about a quarter of Louisiana’s coronavirus cases since March, other than those in nursing homes, prisons, and the like, trace back to bars and restaurants, the story reports. In Maryland, “12 percent of new cases last month were traced to restaurants…and in Colorado, 9 percent of outbreaks overall have been traced to bars and restaurants,” Steinhauer reports. Indoor dining is banned in New York City and many other places, the story states. Many food-service workers have felt pressured to return to their jobs when restaurants re-opened. These jobs are often low-paying, may not offer health insurance, and are disproportionately held by Hispanic people, the story states.

A study published 8/7/20 that assessed a laser-beam approach to measuring the effectiveness of face masks received some misleading and incorrect media coverage this week. This 8/12/20 story by Jonathan Lambert at Science News clears up many of the misconceptions. First, this was not a study of the effectiveness of face masks for blocking droplets released during speech that potentially contain SARS-CoV-2. It was a study of a method for measuring mask effectiveness. And the sample sizes were too low to serve as a test of effectiveness for cutting transmission risk (which again, the study was not meant to do). Also, talking is just one of the ways we might release droplets containing the virus. Singing, coughing, and sneezing also can release them. So, don’t throw out your unjustly maligned neck-gaiter, the story states. Most evidence shows that cloth masks, including “properly worn neck gaiters, filter out the majority of [SARS-CoV-2 and other] viral particles and provide some protection for an individual,” says an infectious diseases researcher at the University of California, San Francisco, who is quoted in the piece.

In an 8/7/20 essay in The New York Times, a prominent epidemiologist and a banker call for a renewed and stricter lockdown in the U.S. for up to six weeks to “crush the spread of the virus to less than one new case per 100,000 people per day.” Currently, the U.S. reports 17 new cases per 100,000 people daily and a total of at least 50,000 new cases daily, write Michael Osterholm, director of the Center for Infectious Disease Research and Policy at the University of Minnesota, and Neel Kashkari, president of the Federal Reserve Bank of Minneapolis. The essay states that prematurely relaxed lockdowns caused the failure of U.S. efforts to contain SARS-CoV-2. Public mask mandates and “soft” social distancing policies “are not enough to control this pandemic,” the authors write. A renewed lockdown should “mandate sheltering in place for everyone but the truly essential workers,” they add. Under such a policy, the nation’s testing and contact tracing capacity could “support reopening the economy.” The authors conclude: “There is no trade-off between health and the economy. Both require aggressively getting control of the virus.”

And here’s an open letter, reportedly signed by more than 150 U.S. medical professionals, that calls for the U.S. to “shut down, start over, do it right” in order to prevent further COVID-19 deaths (updated 8/13/20).

Researchers now are studying more than 165 vaccine candidates to protect against SARS-CoV-2, according to The New York Times’ vaccine tracker, last updated 8/12/20. A total of eight now are in phase 3, that is, being studied in thousands of people for effectiveness and for any rare, unsafe side effects. And two have been approved: the CanSinoBIO vaccine approved by the military in China as a “specially needed drug” for soldiers and the Russia Ministry of Health’s vaccine that recently made news and reportedly might be produced by the end of this year. Neither of these two vaccines underwent a phase 3 study, which concerns many biomedical researchers, public-health experts, and others. By Jonathan Corum, Denise Grady, Sui-Lee Wee, and Carl Zimmer.

This piece by Eric Bender for Knowable (7/30/30) features a few angles and nuggets on SARS-CoV-2 vaccine development efforts that I haven’t seen elsewhere. For instance, Bender explains how research teams and regulators have sped up this work (e.g. individual teams are testing one or two candidates rather than 20; reduced paperwork requirements from regulators; parallel animal and early human safety experiments; and round-the-clock work). The piece also describes the safety commitments among developers of vaccines previously approved for other conditions. The story also clarifies what the endpoint and bar for success are for a phase 3 study (effectiveness and safety study among thousands of people) of a vaccine candidate: “The trials [experiments] all need to run until tests show that a certain number of participants have been exposed to the virus in their normal lives,” Bender writes. Moderna’s Phase 3 study is set to enroll about 30,000 healthy people in the U.S., and the University of Oxford/AstraZeneca Phase 3 study is set to test its candidate in about 50,000 people in the UK and other countries, the story states. The piece also provides some reassuring information about the context in which certain side effects are seen as acceptable while others are not.

This useful interactive, “Could my symptoms be Covid-19?” is available in English and in Spanish and showcases the work of developers and artists at The New York Times. Written by Tara Parker-Pope and Mika Grondahl, the 8/5/20 piece makes clear how widely symptoms can vary among people with the disease. The piece states that four symptoms are very common among people diagnosed with COVID-19 — fever, loss of taste or smell, dry cough, and fatigue. The piece also notes several other less common symptoms. It also describes the most common symptoms in children. “If you have a symptom that might be Covid-19,” the story states, “doctors say you should isolate until you can be tested. Most patients will recover on their own within a few weeks…Seek medical care at any time if you experience trouble breathing, any concerning symptom or take a turn for the worse.”

Sobering reporting by Adam Rogers at Wired makes a strong case that a lack of coordination among U.S. medical centers, researchers, leaders, and policy-makers has significantly hobbled efforts to launch strong studies (randomized studies on large numbers of people who, along with researchers, are “blinded” to whether they receive a treatment or a placebo) and slowed scientific progress toward finding effective drug treatments for COVID-19 (8/10/20). “In the U.S., a lack of central planning, methodological obstacles, and professional pressures meant that since the pandemic began, everyone raced off at top speed, but in different directions, producing incompatible, unusable, or incoherent results—if they got results at all,” Rogers writes. The piece ends with a solution for the next pandemic — “a whole network of centers ready to mount clinical trials at a moment’s notice.”