Scientists caution against comparing immune responses shown in early-stage trials, and say there might be more than one path to an effective vaccine. 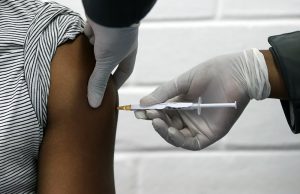 The University of Oxford’s candidate vaccine against COVID-19 is being tested in South Africa, the United Kingdom and Brazil.Credit: Siphiwe Sibeko/AFP via Getty

When it rains, it pours. In the past few days, scientists working at feverish pace to develop vaccines against the coronavirus have released a flood of data from their first human trials.

The results come from phase I and II trials of four promising vaccine candidates, and detail how people respond to the jabs. Because the trials were focused on safety and dosing, the data cannot say whether the vaccines will prevent disease or infection — large-scale efficacy trials are needed for this. But they suggest that the candidate vaccines are broadly safe, and offer the first hints that vaccines can summon immune responses similar to those of people who have been infected with the virus. Crucially, researchers say the data look good enough to merit testing the vaccines in efficacy trials, in which volunteers receive a vaccine or placebo and rates of COVID-19 disease are compared between groups.

“I’m really happy that there are quite diverse vaccine strategies going beyond phase I trials,” says Shane Crotty, a vaccine immunologist at the La Jolla Institute for Immunology in California.

But scientists caution against over-interpreting the results, and say the data shouldn’t be used to compare the vaccines directly. Eventually, such comparisons will be key to identifying how the vaccines work, or why they fail. The information will also be used to prioritize other vaccines at early stages of development and to design new ones. But none of this is possible yet, because researchers don’t know the precise nature of the immune responses that protect against COVID-19 — and there are likely to be multiple ways to fend off infection. Furthermore, measurements of immune markers made in one lab are difficult to compare with those performed by another team, say scientists.

“The data are so early and so preliminary; one thing to avoid is saying one is better at this stage, because we just don’t know,” says Rafi Ahmed, an immunologist at Emory University in Atlanta, Georgia.

All four vaccine-makers said that their vaccines elicited some kind of immune response, broadly similar to the responses seen in people who have recovered from COVID-19. Trial participants experienced side effects commonly seen with other vaccines, such as muscle pain, fevers and headaches, but few developed serious reactions to the vaccines. “Most of them are looking quite safe,” says Crotty.

Two teams — one at the University of Oxford, UK, in collaboration with pharmaceutical company AstraZeneca, and one made up of researchers at CanSino Biologics in Tianjin, China — that are developing ‘viral vector’ vaccines published1,2 their results in The Lancet on 20 July.

“The vaccine is inducing the kind of immune responses that we think are inducing protection against coronavirus,” said Sarah Gilbert, a vaccinologist co-leading the Oxford effort, in a press briefing announcing the results. Oxford’s vaccine harnesses a virus that causes colds in chimpanzees, but that has been genetically modified so that it can’t grow in humans, and so that it expresses the ‘spike’ protein that the coronavirus uses to infect human cells. CanSino’s vaccine uses a similarly modified human virus.

A third group, BioNTech in Mainz, Germany, is developing an RNA-based vaccine with drug company Pfizer. On 20 July, the team released detailed immune data from people who had received a vaccine containing RNA instructions for the ‘receptor binding domain’ portion of the spike protein3. This followed long-awaited clinical-trial results published on 14 July4 by Moderna, a biotech company in Cambridge, Massachusetts, that has developed a competing RNA vaccine made of the entire spike protein, in collaboration with the US National Institute of Allergy and Infectious Diseases (NIAID) in Bethesda, Maryland. Some details of the results were announced in a press release in May.

The latest data offer the best insight yet into the nature of the immune responses prompted by the vaccines — the only indication, short of an efficacy trial, that the vaccines are likely to work.

Vaccines expose the immune system to components of a virus — the coronavirus spike protein, in the case of nearly all COVID-19 vaccines — in the hope of teaching it how to react against a real infection in the future. The trials looked at two broad types of immune response: production of antibody molecules that can recognize and, in some cases, inactivate viral particles; and production of T cells that can kill infected cells and promote other immune responses, including antibody production.

So far, most focus has been on ‘neutralizing antibodies’ circulating in the blood, which can render viral particles non-infectious. “All of these [vaccines] are inducing some antibodies that neutralize, which is better than no neutralizing,” says Ahmed. That’s a decent sign, he says. Most trial participants produced levels of these potent antibodies similar to those measured in people who have recovered from COVID-19, which can vary widely.

But more than one dose might be needed to get this response. “I think two doses will be required for many of these vaccines in order to achieve adequate virus-neutralizing antibodies,” says Peter Hotez, a vaccine scientist at Baylor College of Medicine in Houston, Texas.

T-cell responses have received less attention from vaccine developers. That’s partly because they are more difficult to measure, especially as the number of trial participants pushes into the thousands. But emerging data suggest that T cells might have an important role in controlling the coronavirus, says Crotty.

If a vaccine can elicit a combination of neutralizing antibodies and both kinds of T cell, it could bode well for protecting against disease, says Crotty. But that’s mostly a hunch. “We don’t know the rules for what’s most important for protective immunity,” he says. “It’s definitely plausible that there’s more than one way to protect against this virus.”

The nature of the immune response that protects — or fails to protect — against COVID-19 will become clearer when efficacy trials deliver their first results. “As soon as someone gets efficacy, we’ll have a better idea of what a vaccine needs to do,” Gilbert said in the briefing. Oxford’s vaccine is being tested for efficacy in the United Kingdom, Brazil and South Africa; the Moderna–NIAID vaccine is set to begin its phase III trial in the United States this month.

Such data — known as a correlate of protection — could make it easier to interpret early-stage trial results similar to those released this week. But comparisons can be thwarted by the fickle nature of the tests researchers use to measure neutralizing-antibody and T-cell responses. The same test can return widely different values when performed in different labs or even on different days.

“It’s hard for us to compare our vaccine results to other people’s,” said vaccinologist Adrian Hill, a co-leader of the Oxford effort, in the briefing. “We would really like to see different vaccines being tested in the same lab by the same people.” The US government’s private–public partnership to support COVID-19 vaccines, known as Operation Warp Speed, is supposed to be making such comparisons, notes Hotez. The World Health Organization in Geneva, Switzerland, and the Coalition for Epidemic Preparedness Innovations in Oslo, which has provided financial support to nine vaccine developers, have also announced plans to support this work.

It is crucially important to be able to identify correlates of protection and to be able to compare vaccines, says Daniel Altmann, an immunologist at Imperial College London. “The stakes have never been higher,” he says. “We so desperately need it.”

Altmann thinks that most of the front-runner vaccines “could do the trick”, but he worries that there is not enough emphasis on identifying candidates being developed by companies that are capable of manufacturing and delivering enough vaccine for much of the world. That could depend on myriad issues, from sourcing glass vials to maintaining temperature-controlled supply chains. “That’s like organizing a Moon landing or a world-war invasion. Whichever candidates we pick, we want them to be the ones that can most optimize that.”