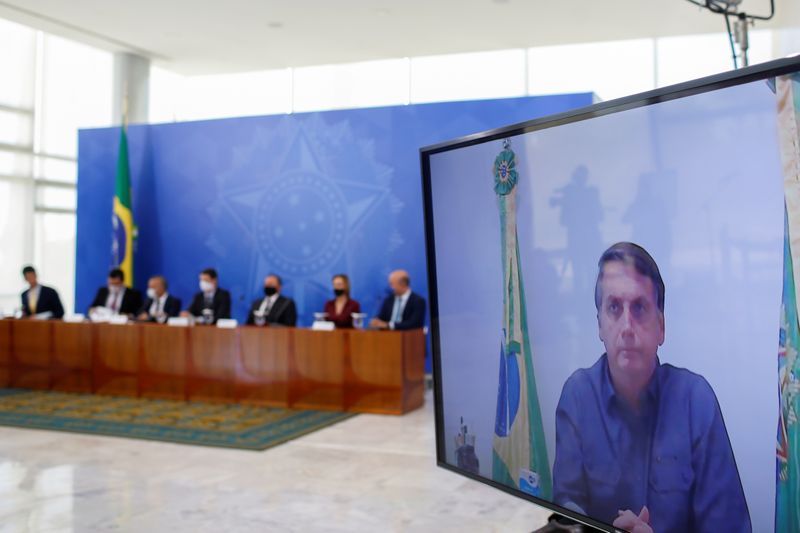 Brazil’s President Jair Bolsonaro is seen on a screen as he attends via video a conference of the launching ceremony of the basic sanitation legal framework at the Planalto Palace, in Brasilia, Brazil July 15, 2020. REUTERS/Adriano Machado

SAO PAULO/BRASILIA (Reuters) – Brazilian President Jair Bolsonaro on Wednesday again extolled the supposed virtues of malaria drug hydroxychloroquine to fight COVID-19, as he said that he again tested positive for the coronavirus, a week after he first announced he had become infected.

“I was medicated from the beginning with hydroxychloroquine, with a doctor’s recommendation. I felt better the next day,” Bolsonaro said in a video posted on social media. “Whether it is a coincidence or not… it worked for me.”

Like close ally U.S. President Donald Trump, Bolsonaro has been quick to sing the praises of hydroxychloroquine, despite scant scientific evidence that it works against the novel coronavirus.

Since catching the virus, Bolsonaro has said he remains in good health and that he would resume his normal work schedule once he tested negative.

On Wednesday, he appeared at a flag ceremony in the grounds of the presidential palace, wearing a mask and remaining at a distance from others. He said he would get tested again in a few days.

Bolsonaro has sidelined medical experts in Brazil’s handling of the pandemic, which has become the worst in the world outside the United States. He has pushed back against state and city lockdowns and often circulated in public without a mask, drawing criticism from public health specialists.

The right-wing president’s pressure to use hydroxychloroquine to treat COVID-19 in Brazil alienated two health ministers, who resigned in the middle of the pandemic. The ministry is currently being led on an interim basis by an active duty army general, who appeared slated to remain in the role for the time being, sources told Reuters on Wednesday.

He described the disease early on in the pandemic as a “little flu” and has played down the country’s mounting death toll – now over 75,000 – and said he has a strong “athletic history” that would protect him from developing serious symptoms.