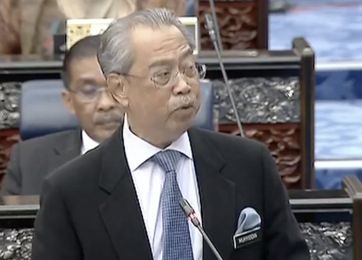 KUALA LUMPUR (Bernama): The Perikatan Nasional government had to take immediate action to curb the spread of the COVID-19 pandemic without first tabling it in the Dewan Rakyat, says Prime Minister Tan Sri Muhyiddin Yassin.

Muhyiddin said the public needed immediate assistance as they were faced with a difficult and complicated situation and could not wait for the Parliament sitting which began Monday (July 13).

“The main problem we faced was the question of managing and tackling Covid-19 and generally, the public knew in this difficult and complicated situation, the government had no choice.

“In fact, I myself felt that immediate action had to be taken even though the Parliament sitting had not begun, ” he told the House.

Muhyiddin was replying to a supplementary question from Opposition leader Datuk Seri Anwar Ibrahim, who is Port Dickson MP, on why MPs were not given the opportunity to have an open debate on the large allocations announced by the government, including for the recovery of the country’s economy post-Covid-19. – Bernama

The Prime Minister said he understood the duties of MPs who had a responsibility to bring up the question of national expenditure, but the government had a duty to look after the people who were facing difficulties.

“There were dozens of initiatives that we had to implement because out there, the people were waiting. They could not wait for this Parliament sitting, they wanted assistance to be given immediately.

“They were facing difficulties, the industry was collapsing, businesses could not be conducted if we waited for today (the Parliament sitting), ” he added.

Muhyiddin said Finance Minister Tengku Datuk Seri Zafrul Abdul Aziz will be tabling the details of this in the current Dewan Rakyat sitting.

He stressed that the government was aware of the laws and regulations of spending so that it does not exceed the ceiling level.