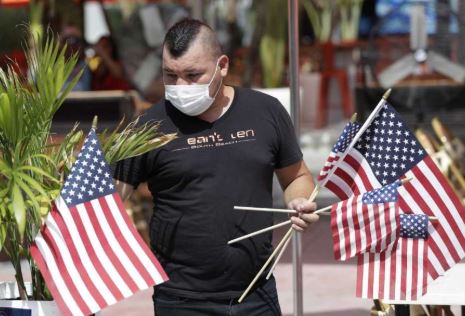 President Donald Trump said Saturday that his administration had “made a lot of progress” on controlling the novel coronavirus pandemic, even as the seven-day average of cases in the United States set a record for the 26th straight day.

Officials and health experts watched nervously to see whether July 4 gatherings would increase the spread while the virus continued to spiral out of control in much of the country, particularly in the South. Several states experienced record numbers of confirmed infections and hospitalizations.

Here are some significant developments:

Florida logged another daily high number of new cases. Hospitalizations in Arizona set a record. Intensive care unit capacity at the world’s largest medical center, in Houston, was exceeded at one point in the day.

In tweets earlier in the day, Trump correctly said the number of virus deaths and the rate of those deaths are declining. He also said that “If we didn’t test so much and so successfully, we would have very few cases” — a false statement that misleads because the rate of positive cases continues to rise in states showing a marked increase in infections.

Trump asserted in his speech at the White House that the country had “put out the flame” of the virus. He added that progress was being made on development of a vaccine, which experts say is unlikely to be widely available until late this year or early next year at the earliest.

Public health experts warned that the virus showed little sign of slowing, partly because of people going to bars and restaurants. Tom Frieden, former director of the Centers for Disease Control and Prevention, said young adults make up a significant share of new infections but added that the virus will spread to others.

“It’s worse, will continue to get worse, and will take months to improve substantially,” he said on Twitter. “We are going in the wrong direction, fast.”

The holiday weekend could be pivotal in the country’s efforts to contain the waves of infection that have swept across the country in recent weeks, testing whether sufficient numbers of Americans are prepared to abruptly alter their behavior to prevent the pandemic from spiraling further out of control. Infections spiked in several states after Memorial Day in May.

Nationwide, the rolling seven-day average for new cases was 48,361 on Saturday, up 11,740 from a week ago, according to tracking by The Washington Post. Eighteen states also reported new average highs.

Florida set another daily record for new infections, reporting 11,458 confirmed cases. The state has reported multiple daily records since late June, and the rate of positive test results has climbed into the double digits. Only New York has tallied more cases in a single day, with 11,571 on April 15.

Adding to Florida’s grim figures, six of the 10 U.S. counties that have seen the sharpest increases in coronavirus cases over the past week were in the Sunshine State, according to The Post’s tracking. They included the population hub of Miami-Dade County as well as several less-populated counties inland and along the Gulf Coast.

In Arizona, another hotbed for new infections, a record 3,113 patients were hospitalized with COVID-19, up 100 from Friday. Ninety percent of the state’s intensive care unit beds and 85 percent of inpatient beds were in use, according to health officials.

Hospitals throughout hard-hit Texas were also filling quickly, with ICU use at Houston’s Texas Medical Center, the world’s largest hospital complex, at one point topping 100 percent. The state’s 7,890 hospitalizations set a record, while local judges in Hidalgo and Starr counties issued emergency alerts saying beds were full and urging the public to stay home.

Some California cities defied requests to clamp down on public gatherings that could spread the virus. Lancaster ignored a ban on fireworks from Los Angeles County health officials and signed a last-minute contract for a show Saturday evening, the Los Angeles Daily News reported. In the San Diego area, several municipalities kept their beach parking lots open, despite the state urging them to close, according to KPBS.

The country’s average daily death toll continued to wane — from 566 this time last week to 487 on Saturday — but experts warned that fatalities could trend upward again as more people fell ill.

On Friday, new infections nationwide reached another single-day high of 57,497, and at least 20 states set record highs for the average of new cases over seven days.

Faced with the soaring numbers, governors and mayors around the country canceled or scaled back Independence Day celebrations and pleaded with people to wear masks, maintain their distance and celebrate only with same-household groups.

“As a veteran, I can tell you patriotism is not about putting your own health or others’ health at risk,” Louisiana Gov. John Bel Edwards, a Democrat, said. “We can honor and celebrate our country in many ways, and I cannot think of anything more patriotic than doing so in a way that protects our family, friends and neighbors.”

Beaches were closed in Los Angeles, South Florida and in other states, but Myrtle Beach, S.C., remained open to the public, even as cases in the city and state continued to rise sharply. The tourist hot spot passed a last-minute mask ordinance as thousands of vacationers arrived for the holiday.

“We are doing all that we can,” Mayor Brenda Bethune told CNN. “I believe that people spread this virus — that’s been proven — not places.”