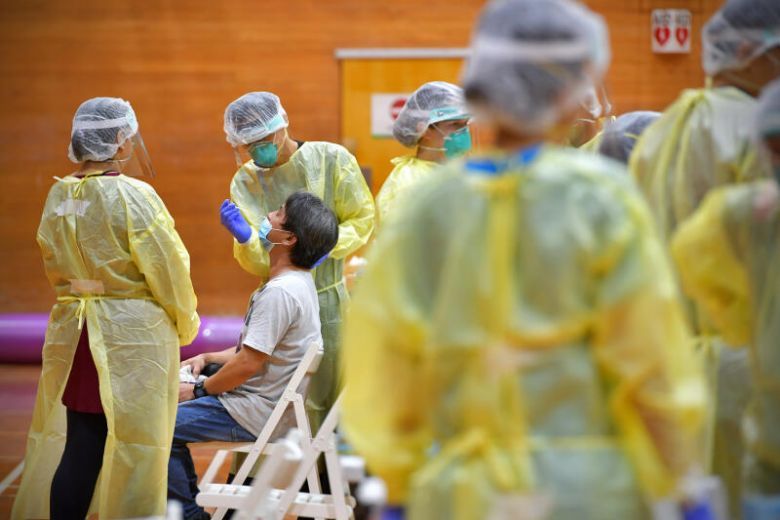 Migrant workers living in dormitories make up the vast majority of the other cases. – – ST

SINGAPORE (The Straits Times/ANN): There are 215 new coronavirus cases confirmed as of Wednesday noon (July 1), taking Singapore’s total to 44,122.

They include 10 community cases, comprising six Singaporeans or permanent residents and four work pass holders, said the Ministry of Health (MOH) on Wednesday.

There are also four imported cases, all of whom had been placed on stay-home notice or isolated upon arrival in Singapore.

Migrant workers living in dormitories make up the vast majority of the other cases.

On Tuesday, a Singapore permanent resident who had returned from India later tested positive for Covid-19, making her the first imported case here since June 14.

The 44-year-old was among 246 new coronavirus cases confirmed by the MOH on Tuesday.

She returned to Singapore on June 24 and was placed on stay-home notice (SHN) at a dedicated facility upon arrival. She developed symptoms on Saturday and tested positive on Tuesday.

The woman was initially counted as a community case but later reclassified as an imported one by MOH.

One of the Singaporeans was asymptomatic and was detected by the ministry’s proactive surveillance of persons deployed to front-line Covid-19 operations.

Epidemiological investigations are ongoing for the other Singaporean patient, a 73-year-old man.

Of the three work permit holders, two had been swabbed as part of proactive screening of workers in essential services. The remaining case was asymptomatic and had been tested as he works in front-line Covid-19 operations.

Two of the five community cases are likely to be cases of past infections and no longer infectious, MOH said.

Meanwhile, four new places were added to the list visited by Covid-19 patients while they were still infectious. They are the Marsiling Lane Market and Cooked Food Centre in 20 Marsiling Lane, Sheng Siong Supermarket in 506 Tampines Central 1, One Supermarket in 201B Tampines Street 21 and Chang Cheng Mee Wah Coffeeshop at the North Link Building in 10 Admiralty Street.

On Tuesday, the Ministry of Education (MOE) also confirmed that a 13-year-old Singaporean student from Rainbow Centre Yishun Park School had contracted Covid-19

Rainbow Centre is a charity which runs schools for people with disabilities. The patient was first announced by MOH on Sunday. She first experienced symptoms on June 10, and was confirmed to be infected on Saturday.

MOE did not say what happened in the 17 days between the development of her symptoms and the confirmation of her infection. However, MOE said the girl had not been in school since Jan 2 due to medical reasons.

Migrant workers living in dormitories made up the remaining 240 cases announced on Tuesday.

With 515 cases discharged on Tuesday, 38,488 patients have fully recovered from the disease.

A total of 215 patients remain in hospital, including one in the intensive care unit, while 5,166 are recuperating in community facilities.

Singapore has had 26 deaths from Covid-19 complications, while 12 who tested positive died of other causes.

Globally the virus outbreak, which began in December last year, has infected more than 10.5 million people. More than 513,000 people have died. – The Straits Times/Asia News Network