Both evolved from ‘endemic’, which means something native to a particular place.
Until the mid-19th century, ‘epidemic’ and ‘pandemic’ were interchangeable in medical dictionaries. 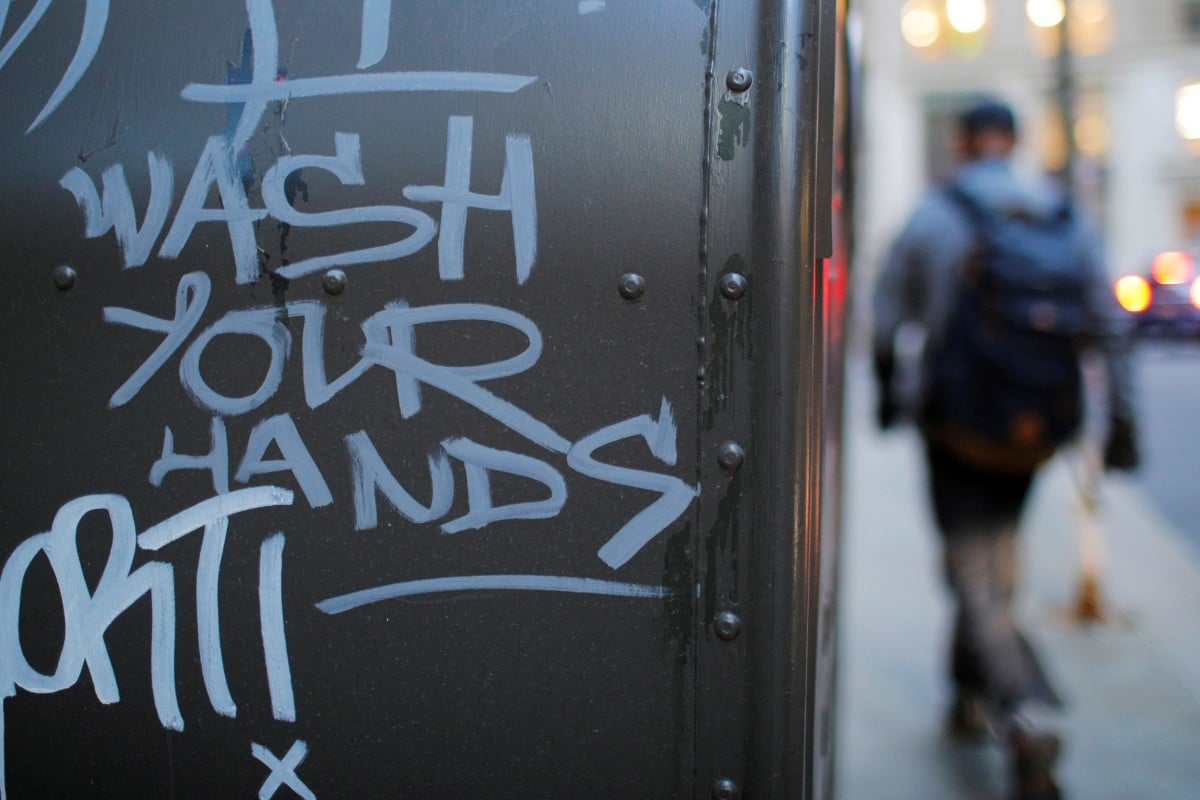 Some helpful graffiti in Boston, in the US state of Massachusetts, on March 10, a day before the WHO declared the coronavirus a pandemic. Photo: Reuters

The question for a while was: when would the World Health Organisation declare Covid-19 a pandemic?

A first understanding lies in etymology, and how a disease can be classified at different levels.

The baseline is “endemic”, the term originating in the Greek en (“in”) + demos (“people”) + suffix -ic, meaning of or belonging to a place, native. Endemic diseases are habitually prevalent in a certain community due to permanent local causes.

“Epidemic” is also from Greek, with epi meaning “among, upon”. In its earliest use, by Homer in the Odyssey, later by Plato and Xenophon, epidemios meant one who is back home, in one’s country, and was used for a range of subjects including persons, rain and war – though not disease. In the 5th century BC, this evolved to meaning that which circulates or propagates in a country; Sophocles used it to describe fame, reputation. But it was Hippocrates’ seven-volume Epidemics that established a medical meaning for the word, in describing a series of syndromes propagating in a given place over a given period.

Around the same time, Thucydides’ document­ation of the plague of Athens – using the word nosos (“contagious disease, plague”) – was consider­ed among the first descriptions of an epidemic. Much later, through succes­sive waves of the plague in the Middle Ages, epidemics came to be identified as being the same well-characterised disease, and, through Louis Pasteur’s and Robert Koch’s research, attri­buted to the same microbe.

The adjective epidemios gave rise to the Greek and then the Latin noun epidemia, in which Medieval French ypidime has its origins, developing into épidémie and épidémique. English had adopted “epidemic” by the early 1600s (replacing the Middle English man-qualm, from the Old English man-cwealm “death of men, pestilence”).

Finally, there’s “pandemic”, where the Greek pan means “common, all”. As late as the mid-19th century, “epidemic” and “pandemic” were used interchangeably in established medical dictionaries. A distinction started to be made in the late 1800s; in Ernst Wagner’s General Pathology, an epidemic exists in one community only while a pandemic is marked by its geographic extensive­ness. WHO defines a pandemic as “the worldwide spread of a new disease”.

Covid-19 had for many weeks already been acknowledged by many as a pandemic – and was, finally on Wednesday, March 11, declared as such by the WHO. Any official declaration of a pandemic has implications for health and government agencies’ response plans, including resource allocation. As with many distinctions – think minority, indigenous – definitions have political and economic ramifications.