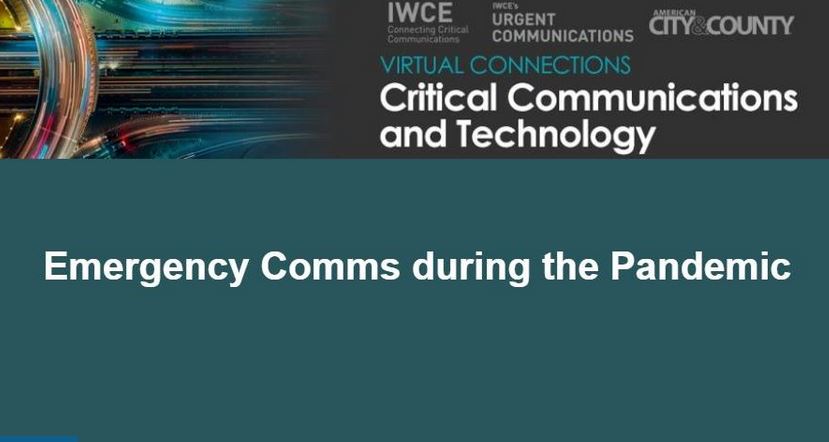 Many measures implemented initially in reaction to demands associated with the COVID-19 pandemic likely will become long-term components of public-safety communications, particularly in the 911 arena, public-safety representatives said during a recent webinar.

Mel Maier, captain of the emergency communications and operations division of the Oakland County (Mich.) Sheriff’s Office, said the COVID-19 situation has illuminated the need for interoperability between public-safety answering points (PSAPs) that allows for efficient transfers of information and resources. In addition, requirements for social distancing and health safety have caused many entities to accelerate adoption of cloud-based and remote-working solutions, he said.

“Do I believe that this has fundamentally changed this concept of what we do as the Emergency Communications Center? It absolutely has,” Maier said during the “Emergency Comms during the Pandemic” webinar, which can be heard on demand at the Virtual Connection website. “It has, and this will be with us for the rest of our careers.

“Not just the remote-capability needs or the interoperability between PSAPs. We have to have well-defined policies and training to meet the needs of the future next-gen 911.”

Tyrell Morris, executive director for the Orleans Parish Communications District that provides 911 and 311 services to the city of New Orleans, echoed this sentiment, noting that 911 hubs like his serve active roles in the response effort beyond simply accepting emergency calls.

“I think it’s changing 100%. The function of emergency communications has just been reimagined,” Morris said during the webinar. “I tell my people all the time, ‘Don’t call my center a call center.’ 20% of my real estate is answering the 911 call. The remaining 80% of my real estate is managing the incident. We are an intelligence organization, and we need to be resourced as such.

“Our staff is not only taking in information, but we’re making decisions on what resources we send and what type of resources. We’re even doing some investigative work. On the 311 side, [we’re] looking at the history of a particular residence, or we’re doing NCIC queries against a terrorist watch list. All of that’s happening in communications [centers]. Our goal is to paint the best, most detailed picture for first responders, so they make the appropriate tactical decision.”

Morris also noted that his center also is impacting the local community during the COVID-19 pandemic by performing important services that outside of the description of a typical first-responder mission.

“In this particular case, we became really the central hub for all information,” Morris said. “We began creating a registries for special needs. We took a registry of people who needed home deliveries. We began to become the central place for information for everybody and really embraced that.

“And this, my friends, is the new normal for communications centers. We no longer are just sending police, fire and EMS. We are becoming the central hubs of information for entire governments.

TJ Kennedy, co-founder of The Public Safety Network consulting firm and former president of the FirstNet Authority, said the emerging trend of rapidly deployable solutions that leverage broadband systems with public-safety priority and preemption is proving to be crucial for the 911 community amid the COVID-19 pandemic.

“I think we’re also seeing quicker adoption of remote abilities, whether it’s cloud-based or hosted for call-routing or hosted for computer-aided dispatch,” Kennedy said during the webinar. “Going from on-premise to the cloud [is a change] that we knew was always going to happen … Personally, I was surprised that it wasn’t happening faster. but I’ve seen a lot in the last two or three months that has occurred because it just makes sense during a pandemic.”

Adoption of such technologies is being accelerated by COVID-19 circumstances, but the changes will outlast the period of the pandemic, according to Kennedy.

“I think it’s going to stay around, because it does just make sense—it does give us more redundancy and more reliability,” he said. “Now that we have more ways than ever, with public-safety-broadband LTE networks like FirstNet … that are providing more enhanced reliability with priority, these are giving abilities for dispatchers to dispatch from home as a modem or as a way to be able to operate.

“These are very different times than where we were a year ago, and I think these changes will be very positive for public safety and the technology industry.”

And this long-term use of public-safety broadband will not be limited to the 911 arena, Kennedy said. During the COVID-19 pandemic, examples of push-to-talk deployments using push-to-talk applications that can be implemented quickly—at a fraction of the time and cost associated with land mobile radio—continue to be cited at temporary sites throughout the country.

“We have a younger generation today, and their primary communications tool is a smart device, a smartphone—it’s natural to them,” Kennedy said. “For most people, they’re always going to be carrying a smart device with them. So, you have an ability—if you can put tools on that device—that allows everyone to communicate immediately.

“I think it’s really important that we meet our first responders—and those that support them—where they are today and that we give them tools that just work … It’s a lot easier to expand and to adapt to those with tools and technologies that people are used to using. So, I think that you’re just seeing that usability factor be such a big part of this decision.”

While Kennedy noted the ease of deploying PTT-over-LTE solutions, Maier noted some of the challenges his county has had trying to complete the installation of a new 31-site P25 system—designed to support 6,000 subscribers and 76 dispatch consoles—amid the COVID-19 pandemic, which hit the area particularly hard.

“We couldn’t get out-of-area vendors to come into what they considered a [COVID-19] hot spot,” Maier said. “They could not get people—technologists and work crews—in, because they couldn’t stay at our hotels, they couldn’t eat at the restaurants, they couldn’t shop at the stores. We had to shut down. That project did slow down.

“Part sourcing became an issue. Mainland China supplies a lot of batteries and things that we need for our system. Those get moved around through the world, and they’re shipped in different ways. All of those things took extra time.”

Both Maier and Morris expressed concern about the financial repercussion that the economic shutdown mandated as a COVID-19 response will have on their public-safety operations.

Some 911 centers are funded primarily by fees attached to landline and wireless connections, but Morris said that source provides only about one-third of his center’s $18 million annual budget. The bulk of his center’s funding comes from the city of New Orleans tax base, which is heavily dependent on the tourism and hospitality industries that have been crippled during the pandemic.

“There will be an impact,” Morris said. “We don’t know what the impact is yet. We know that the city government itself is predicting about a $160 million deficit in lost sales-tax revenue, so we’re just trying to find ways creatively to fill that gap.

“I will tell you that it’s very difficult. When grant opportunities come out, there’s nothing specific to support emergency communications … I think we’ve got to have the federal government realize that their structure of how the money is divvied up has to be a little more brought up to speed with what is happening on the ground, because it’s doing us a disservice, and the restrictions on where the [federal grant] dollars are placed are not really where the need is.”

Maier said that his county has received “several hundred million dollars” through the CARES Act to address costs associated with COVID-19 response efforts but noted that those funds are “just a short-term fix.” Work is ongoing to determine the size of the revenue gaps that Oakland County will have to fill, absent financial aid from the federal government.

“[The revenue gaps are] significant,” Maier said. “As we look further and start doing those projections, we have a pretty fixed base here—we have people with cellular phones, with landline phones and business [phones]. It’s very predictable year to year, but now we’ve really injected some unpredictability into funding.”

In the 911 community, many discussions surrounding a lack of funding and resources often turn to the notion of consolidating some of the more than 6,100 PSAPs in the U.S. to more efficiently share resources.

While there is considerable conceptual support for PSAP consolidation, exactly how it should be executed has become a controversial topic within the 911 community. Some favor physical consolidations, in which the staffs of existing PSAPs are moved into a single building. Others propose virtual consolidations, which allow for existing PSAPs to remain in their physical locations, but broadband links between PSAPs let 911 centers share resources as if they were in the same facility.

Maier also noted that physical consolidation is made more difficult by the way that 911 personnel often are utilized.

“We’re already looking at some of the aspects of consolidation,” Maier said. “Now, the type of job and the work that you’re doing today—whether it’s call-taking or radio dispatching—may be different than what a local PSAP is actually doing with their dispatch staff. As we look at those jobs—whether it’s assisting people who walk in or producing reports for customers or dealing with prison inmates—those are things that are really happening with our dispatchers right now. They’re not just 911 operators and radio dispatchers.

“So, in those situations, we have to look at things a little differently with some virtual consolidations.

Morris also said that the COVID-19 situation is causing officials to examine the idea of 911 consolidation more closely, as well as the notion of privatization.

“The consolidation conversations are already beginning to happen,” Morris said. “We’re also seeing conversations about privatization happening. If government cannot afford anymore to operate a PSAP, can a third-party commercial vendor come in and regionalize a PSAP and operate it as a private business?”

Morris said those 911 officials who are willing to consider such unusual measures may be better positioned to provide meaningful input into what ultimately happens to their centers.

“It’s going to be difficult for the 911 director to be bold enough and brave enough to say, ‘Yes, someone else can do this better than I can,’” Morris said. “But either you make that decision now—and you kind of control how things happen and make sure that your people are taken care of and make sure the services are in line—or you’re going to have either a catastrophe or a financial crisis and the decision is going to be made for you.”

“I don’t think there is a single organization—even mine—that’s in a position to say ‘Yes’ to every single high-quality standard. But I think there is going to be an expectation from the public that we do that.”

Given this, Morris said he believes change will be coming to the 911 community, which needs to adapt to be in a position to address increasingly complex challenges.

“Look at COVID and all of these acts of terror that we’re seeing—they’re becoming more creative in how they happen,” Morris said. “The threat is changing, and we have to change, as well.”