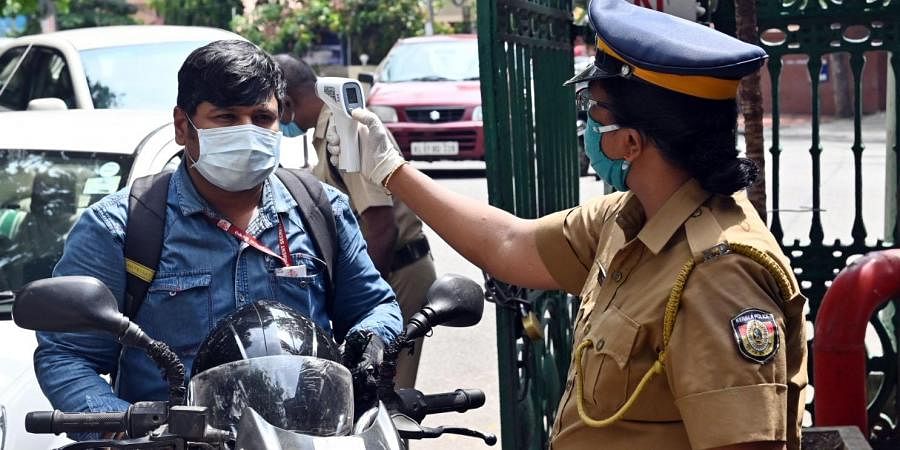 Health team screening employees of Secretariat at the entrance with an infrared thermometer in Thiruvananthapuram on Friday. (Photo | Vincent Pulickal/EPS)

THIRUVANANTHAPURAM: As many as 11 persons tested positive for Covid-19 in the state on Sunday. This includes three healthcare workers, a doctor and a nurse of the Regional Cancer Centre, Thiruvananthapuram. The new cases were reported from Idukki (six) and Kottayam (five). On the day, four people were recovered from the disease.

“Of the six persons from Idukki, one is an imported case. Two came from Tamil Nadu and the other three contracted the virus through contact. This includes a doctor. In the case of Kottayam, one had come from outside the state whereas the remaining four, including two healthcare workers, contracted the disease through contact,” reads a statement of the health department.

The recovered persons are from Thiruvananthapuram, Malappuram, Kannur and Kasaragod. At the same time, the total positive cases in the state touched 468 of which 342 had recovered from the disease. As many as 123 people are currently under treatment.

Health Dept on high alert as RCC nurse tests positive
The incident in which a nurse working at RCC contracted Covid-19 has put the health department on high alert.  According to the department, the nurse went to her native place in Kottayam on March 23 after the RCC had released one-third of its staff for implementing the rotation system. There, she is said to have visited the Kottayam Primary Health Centre.

“As of now, there is no such concern at the RCC. But for tracing the source of transmission, the patient’s route map will have to be prepared. A decision on tracing and testing her contacts at the RCC even before March 23 will have to come from the higher level,” said a source.  From April 15, the RCC is conducting various cancer surgeries and it was on Saturday that the government decided to test the samples of patients for Covid-19 before surgery.