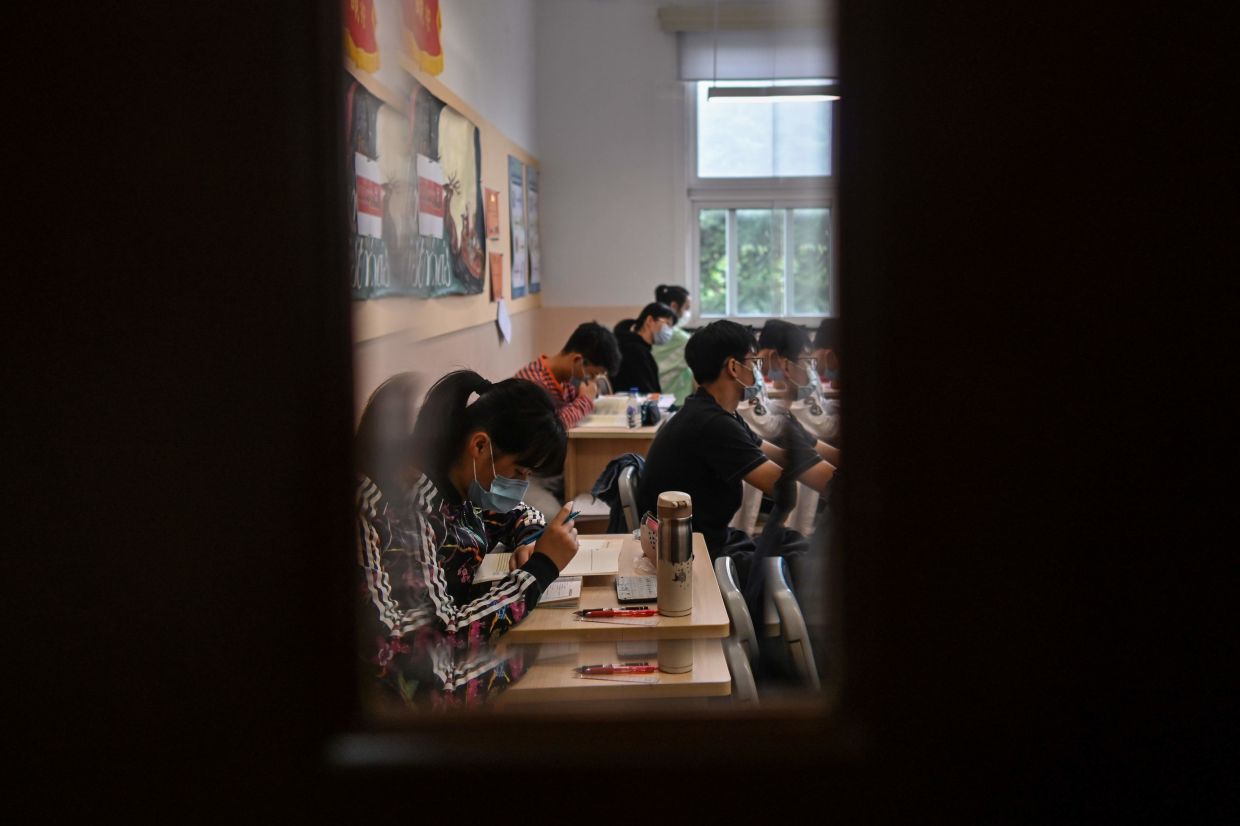 Students wearing face masks are seen in their classroom during a government organised media tour at Shanghai High School after it reopened in Shanghai on May 7, 2020. – Some schools in China that have been closed or online-only since January began gradually reopening last month, with Beijing and Shanghai letting some students return last week. (Photo by Hector RETAMAL / AFP)

BEIJING: Temperature-monitoring bracelets that alert an app if a student has a fever were being trialled at Beijing schools on Monday – China’s latest use of high-tech to track its population’s possible exposure to the novel coronavirus.

China has deployed thermal cameras in public areas and most places require people to show an app with green, yellow and red ratings that determine a person’s infection risk based on travel history.

The bracelets were rolled out in five Beijing districts for the first classes for middle school students in months.

The bands provide real-time temperature data that can be monitored by schools and parents via an app, the Beijing Daily reported.

“The bracelet is similar to a normal fitness tracker… We recommend that students wear them 24 hours a day,” one unnamed teacher told the Beijing Daily.

If a student’s temperature rises above 37.2 degrees, the bracelet will prompt their teacher to alert the police, the state-run Beijing News said.

Over the past few weeks, a wave of schools have gradually reopened across China with extra health and safety measures as the country begins the transition back into normal life.

Final-year high school students returned to class in China’s capital at the end of April after closing for three months during the coronavirus outbreak.

Trials of smart temperature-monitoring technology have already taken place in 18 senior high schools in the city’s Fengtai District, according to reports.

Daily temperature monitoring, compulsory mask-wearing and social-distancing policies have become the new normal at schools across China, as officials try to contain the epidemic domestically.

China’s southern province of Guangdong required all 167,000 of the first batch of returning high school students and 30,000 teachers to undergo nucleic acid testing in late April.

China has largely brought the virus that started in the central city of Wuhan under control but it remains on edge for a second wave of infections.

A new cluster outbreak reappeared over the weekend in Wuhan, while the northeastern city of Shulan was placed under lockdown Sunday after another local nest of infections emerged. – AFP