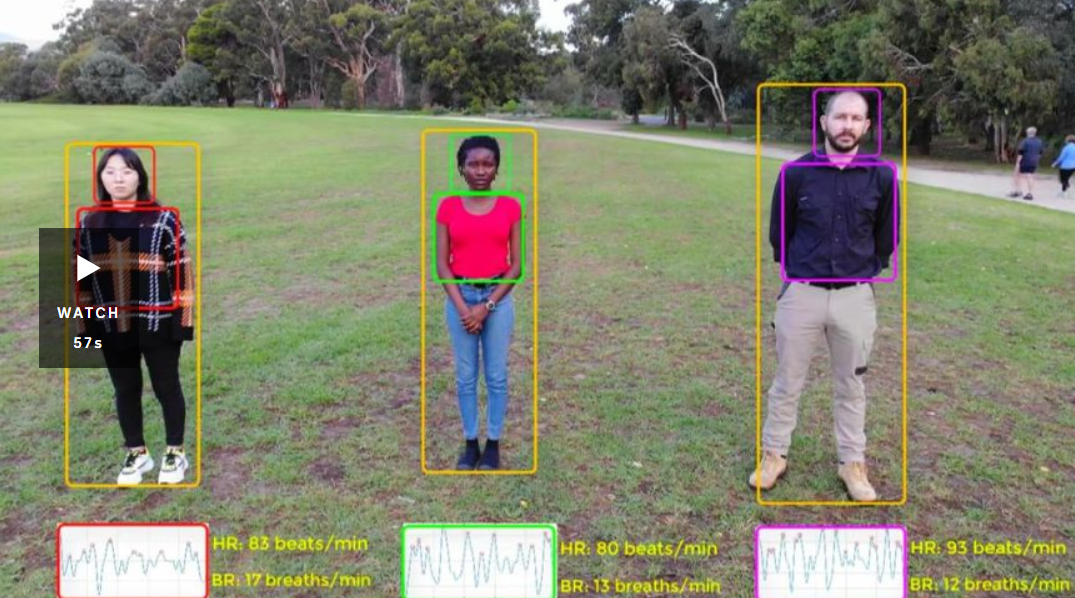 A pandemic drone can be used to track temperatures, fever and social distancing.

If you don’t feel comfortable signing up to the Government’s COVIDSafe tracking app, then you probably won’t be happy to hear about the pandemic drone.

Software being developed at the University of South Australia in conjunction with Canadian drone manufacturer Draganfly could see drones used to monitor the health of people, including spotting sneezes and tracking whether they have a fever.

It is just one way technology could be used to track and slow the spread of a virus like COVID-19.

But experts warn that new surveillance technologies must include privacy safeguards before they are adopted.

Heart rate can be detected within 8 metres

Professor Javaan Chahl, who holds positions with the University of South Australia and the Department of Defence, is developing software for the pandemic drone.

The device uses thermal cameras and artificial intelligence to measure some of the indicators of coronavirus in groups of people: heart rate, body temperature, coughing and sneezing.

“Heart rate can be measured in two different ways,” he told 7.30.

“From a drone, we normally would measure it by a subtle change in skin tone that’s associated with each heartbeat.

“And it’s caused by changing the volume of blood in the skin. It also causes slight movement.”

The drone would also be able to detect a cough from “15-20 metres away”, while the heart rate can be detected within 6-8 metres with only a “very small” margin of error.

It could also be used to monitor social distancing.

While still six months from completion, Professor Chahl hoped it would be used to collect data on a large scale and track patterns of behaviour to paint a broad picture of the spread of COVID-19 in a city, rather than monitor individuals.

“When you look at thousands of people, or millions of people, you’ll start to see a trend,” he said.

“And I think we don’t have systems in place to surveil for that, particularly.

“It would be very useful to know how many people are suffering from symptoms associated with respiratory distress.

“So, if you see a lot of people coughing and sneezing and with elevated heart rates and breathing rates and fever, okay, that’s good to know.

“And if that’s increasing, that’s very important to know.”

Professor Chahl does acknowledge the technology could also be used to watch and target individuals if a future user wanted to.

Breaking down the latest news and research to understand how the world is living through an epidemic, this is the ABC’s Coronacast podcast.

“All such technologies carry a risk with them,” he said.

“I might think it’s a very bad idea to use drones to chase people around who might be sick. But perhaps others might have different ideas.

“And it’s very hard to restrain them from using it like that once the genie is out of the bottle.”

Police in the US city of Westport, an hour north of New York, were trialling the software along with Draganfly, but pulled out last week over privacy concerns.

“There’s a lot of discussion going on at the moment about how we manage that privacy so that you don’t take away people’s freedom, or start imposing on them unnecessarily,” Professor Chahl said.

“But you do want to watch for the presence of this infectious disease. So there’s a lot of challenges.”

“I think the devil is in the detail: how it’s rolled out, what safeguards are put in place,” he said.

“There’s every reason that this technology could be a useful tool in our armoury with rolling back the restrictions and allowing people to go about somewhat more normal lives.

“But, equally, there are concerns that you’d have about people’s privacy and about whether when normality has returned, that we are not finding ourselves in a big brother surveillance state.”

Several places in east Asia, including Hong Kong, Taiwan and South Korea, have taken a more technology-driven approach to fighting coronavirus, successfully slowing the rate of transmission without enforcing the same strict lockdowns seen in Australia and some European countries, and keeping shops and restaurants open.

Everyone who lands in Hong Kong must download a mandatory phone app and wear a wristband for two weeks while in compulsory quarantine.

The app and wristband work together to track the user’s whereabouts, along with regular video calls from health officials.

Professor Walsh doubts that level of surveillance would go down well in Australia.

“These are extraordinary times, but I think those are extraordinary measures that I suspect most people in Australia would find too much down the road to taking us to what [authors] George Orwell, Huxley and other people have warned us about the surveillance state that we could be in,” Professor Walsh said.

Another distinct feature of Hong Kong’s tech-driven approach to tackling the virus is the routine use of temperature checks, which are a common sight at the entrance to restaurants, offices, shopping malls and government buildings across the city.

His company iOmniscient has developed an automated fever scanning system which can operate through CCTV cameras to check the temperatures of people in crowds.

He claimed it was accurate “to about 0.2 of a degree Celsius”.

“Now and in the future, we will be releasing the lockdown, there’ll be lesser restrictions,” he told 7.30.

“And in those environments we are going to still have to keep track of everyone.

“We are going to have to monitor people to make sure that there is no one round with a fever, because the fever is the first external indication, usually, of an infection of the coronavirus.”

Dr Kanga said the software used artificial intelligence, including facial recognition, to automatically read the body temperature of “hundreds of people” at once in a crowd and alert authorities if someone had a fever.

The system could then track them through a network of cameras until they could be identified by a staff member or official.

“It uses what is called a thermographic camera, which is a camera that can detect the heat of things in the environment,” he said.

“In this case, it’s detecting the temperature of a person’s skin.”

Dr Kanga believed the technology could be useful in places where people are still gathering in groups such as schools, pharmacies, shops, defence facilities, hospitals and prisons.

“Today there is no real checking in public areas of whether people have fevers,” he said.

“A system like this will give them an early indication that there’s someone who potentially has a fever.”

The use of facial recognition technology is highly controversial and concerns have long been raised by civil liberties groups about its use in public spaces and about the potential for authorities to use it to track citizens.

But Dr Kanga said his software “anonymised” faces by default and people would only be identified when requested by the user.

“Everyone’s face can be redacted so that nobody sees anything,” he said.

“However, if there’s a person with a fever, that person’s image is sent to the smartphone or the paramedic so that he can be checked out.”

Professor Walsh said technologies like this could be part of Australia’s approach, but won’t replace the need for social distancing.

“It’s worth pointing out those modern technologies are not going to be a panacea,” he said.

“And, until that point, our lives are going to be somewhat on hold.”