Basic supplies like oxygen and soap are needed first to slow the spread of the coronavirus.

DAKAR, Senegal — South Sudan, a nation of 11 million, has more vice presidents (five) than ventilators (four). The Central African Republic has three ventilators for its five million people. In Liberia, which is similar in size, there are six working machines — and one of them sits behind the gates of the United States Embassy.

In all, fewer than 2,000 working ventilators have to serve hundreds of millions of people in public hospitals across 41 African countries, the World Health Organization says, compared with more than 170,000 in the United States.

Ten countries in Africa have none at all.

Glaring disparities like these are just part of the reason people across Africa are steeling themselves for the coronavirus, fearful of outbreaks that could be catastrophic in countries with struggling health systems.

The gaps are so entrenched that many experts are worried about chronic shortages of much more basic supplies needed to slow the spread of the disease and treat the sick on the continent — things like masks, oxygen and, even more fundamentally, soap and water.

Clean running water and soap are in such short supply that only 15 percent of sub-Saharan Africans had access to basic hand-washing facilities in 2015, according to the United Nations. In Liberia, it is even worse — 97 percent of homes did not have clean water and soap in 2017, the U.N. says.

“The things that people need are simple things,” said Kalipso Chalkidou, the director of global health policy at the Center for Global Development, a research group. “Not high-tech things.”

Though limited testing means it is impossible to know the true scale of infections on the continent, several African countries report growing outbreaks. A snapshot of the situation on Friday showed that Guinea’s cases were doubling every six days; Ghana’s, every nine. South Africa had more than 2,600 cases; Cameroon, nearly 1,000.

Of course, there are big disparities among Africa’s 55 countries, too. Ventilators are much more plentiful in South Africa, which has a big economy and a relatively strong health infrastructure, than in Burkina Faso, one of the earliest West African countries to be hit by the coronavirus. At last count, it had 11 ventilators for 20 million people.

And not all African countries want it known how few ventilators they have. For some, this information could have “a lot of political implications,” including criticism of their management of health systems, according to Benjamin Djoudalbaye, head of health diplomacy and communication for the Africa Centers for Disease Control and Prevention. 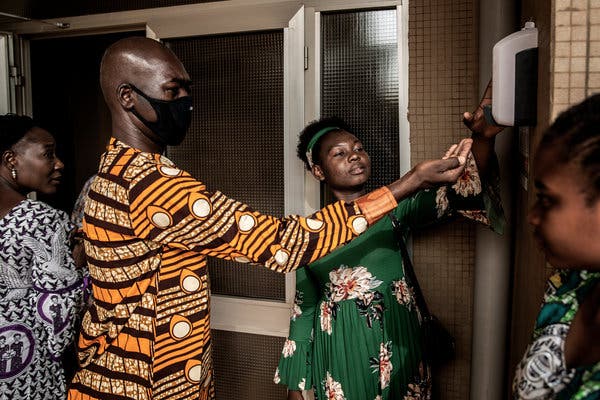 The Africa C.D.C. has been trying to amass data on how many ventilators and intensive care units each country has, so it can model what needs will arise if there is an explosion of cases. But even collecting the data is not easily “attainable and extremely expensive,” Mr. Djoudalbaye said.

The World Health Organization said last week that there were fewer than 5,000 intensive care beds across 43 of Africa’s 55 countries — amounting to about five beds per million people, compared with about 4,000 beds per million in Europe. But the numbers in Africa are so unclear — the data is a scattershot representation of the continent — that there is no way of knowing for sure, Mr. Djoudalbaye says.

Across Africa, there have been efforts to get ventilators. Ecowas, the union of West African countries, is trying to get hold of them to distribute to its member states. On April 1, Nigeria’s finance ministry appealed to Elon Musk on Twitter — before deleting its message — admitting that Africa’s most populous nation needed support and asking for at least 100. Jack Ma, the Chinese billionaire, says he is donating 500 to the continent.

Liberia has ordered another 20, according to Eugene Nagbe, the minister of information. But global demand is so high, he said, that vendors are the ones calling the shots, and it is difficult to compete with more powerful nations.

“We keep fighting with our neighbours and the big countries. Even having a contract is not a guarantee we’re going to get a supply,” Mr Nagbe said. One vendor, after entering a contract, turned around and hiked the price from the agreed-upon $15,000 per ventilator to $24,000, he added.

Getting more ventilators to African countries is not enough, though. Trained medical personnel are also needed to run the machines, as well as a reliable electricity supply and piped oxygen. These are things taken for granted in most European and American hospitals, but are frequently absent in health facilities across the African continent.

The hospital where Mr. Kibrom works, the Ayder Comprehensive Hospital, has two oxygen plants. One is broken.

Help has come from an unexpected quarter: Velocity Apparelz, a nearby denim factory. Under normal circumstances, garment manufacturers produce oxygen to use in the bleaching process, so the local health authority asked them to step in. Hospitals and health authorities across the continent are having to think of solutions like this.

The prospect of a devastating pandemic has led many African governments to take serious measures. Some imposed curfews and travel restrictions when only a few dozen cases in their countries had been confirmed.

And before officials knew of any confirmed cases, airports in Niger and Mali were taking passengers’ temperatures and contact information in case they needed to be traced. Every morning in Senegal, the health minister gives a live update on Facebook.

The crisis has shown that Africa needs to be self-reliant, said Amy Niang, a lecturer in international relations at South Africa’s University of the Witwatersrand.

“The brutal withdrawal of the U.S. of its contributions to the W.H.O., and the management of the crisis more globally, is a stark reminder that Africa’s faith in multilateralism has become untenable,” she said.

One positive legacy of the West African Ebola outbreak of the last decade was the founding of the Africa C.D.C., which together with the World Health Organization’s Africa branch has been widely praised for a coordinated approach to tackling the pandemic.

But leadership can go only so far.

“The main thing is how can we scale up capacity — at least for some of the basic treatment — and how can we detect earlier?” said Michel Yao, emergency operations program manager in the W.H.O.’s regional office for Africa.

In recent years, Nigeria has struggled to cope with outbreaks of Lassa fever, measles and polio. The Democratic Republic of Congo has failed to bring its current Ebola outbreak to an end. Malaria, a disease that is relatively simple to treat, kills hundreds of thousands across the continent every year.

And the state of public health systems in many African countries is bad enough that many people will not go to a hospital at all, feeling that it is a place of last resort.

“Everyone doesn’t feel like the health system is made for them to get better in,” said Adia Benton, an anthropologist at Northwestern University whose focuses include global health. Often in Sierra Leone, where she has worked extensively, people go to a hospital to die, Ms. Benton said — and this will not change with the coronavirus outbreak.

“There are a lot of people who are going to just be sick and in bed. And so what will you be doing for those folks? What kinds of palliation will be provided? Will communities be able to come together to offer painkillers, fever reducers, expectorants, decongestants — things like that?”

It wasn’t supposed to be this way. At a United Nations conference on primary health care back in 1978, the Health for All initiative was launched. One of its goals was to tackle the gross inequality in global health, particularly between developed and developing nations.

Enthusiastically welcomed by African governments, it never took off. The rise of free market capitalism in the 1980s, several experts say, changed the notion that states should be responsible for providing health care to every citizen.

This past week, in an impassioned letter to African leaders calling for health workers’ status to be enhanced and hospital infrastructure upgraded, 88 intellectuals from across the continent returned to the idea of universal health care.

“Health has to be conceived as an essential public good,” they said.