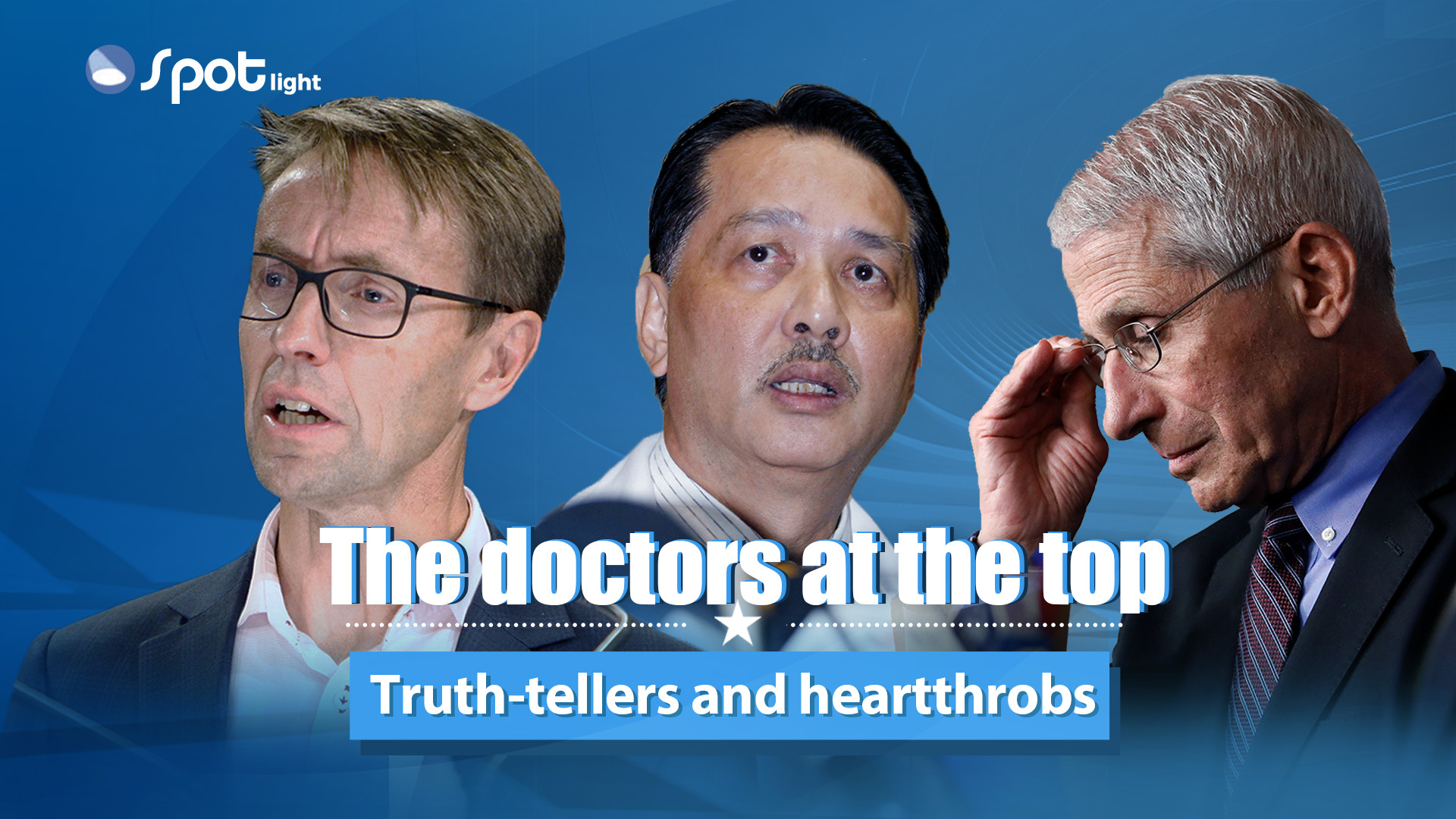 From Anthony Fauci in the U.S. to New Zealand’s Ashley Bloomfield and Noor Hisham Abdullah in Malaysia, these medical professionals have been calm and clear in doling out health advice devoid of politics for weeks, and gained a loyal following in the process.

Two months ago, hardly anybody knew who they were. Today, they have become household names and have been called heartthrobs, rockstars and national heroes on social media, print and TV – not what you’d expect for three men in suits who can be seen most days speaking from behind a lectern about facts and data.

Fauci, 79, is the director of the U.S. National Institute of Allergy and Infectious Diseases (NIAD) while Bloomfield, 54, and Hisham, 56, are respectively directors-general of health in New Zealand’s and Malaysia’s health ministries.

None of them are cabinet ministers but all three have emerged as the face of their country’s response to COVID-19.

In daily press briefings that have become must-watch TV, they have updated the public on new cases, calmly explained why lockdown measures are needed and patiently answered questions on how the virus can spread and when a vaccine might be ready.

Amid an unprecedented global pandemic and as governments worldwide have sometimes been slow to react, introducing confusing measures and sending contradictory messages, Fauci, Bloomfield and Hisham have become voices of reason and sources of calm and reassurance.

Fauci is “the one guy you can trust,” notes a Facebook fan page that has already garnered 75,000 members. 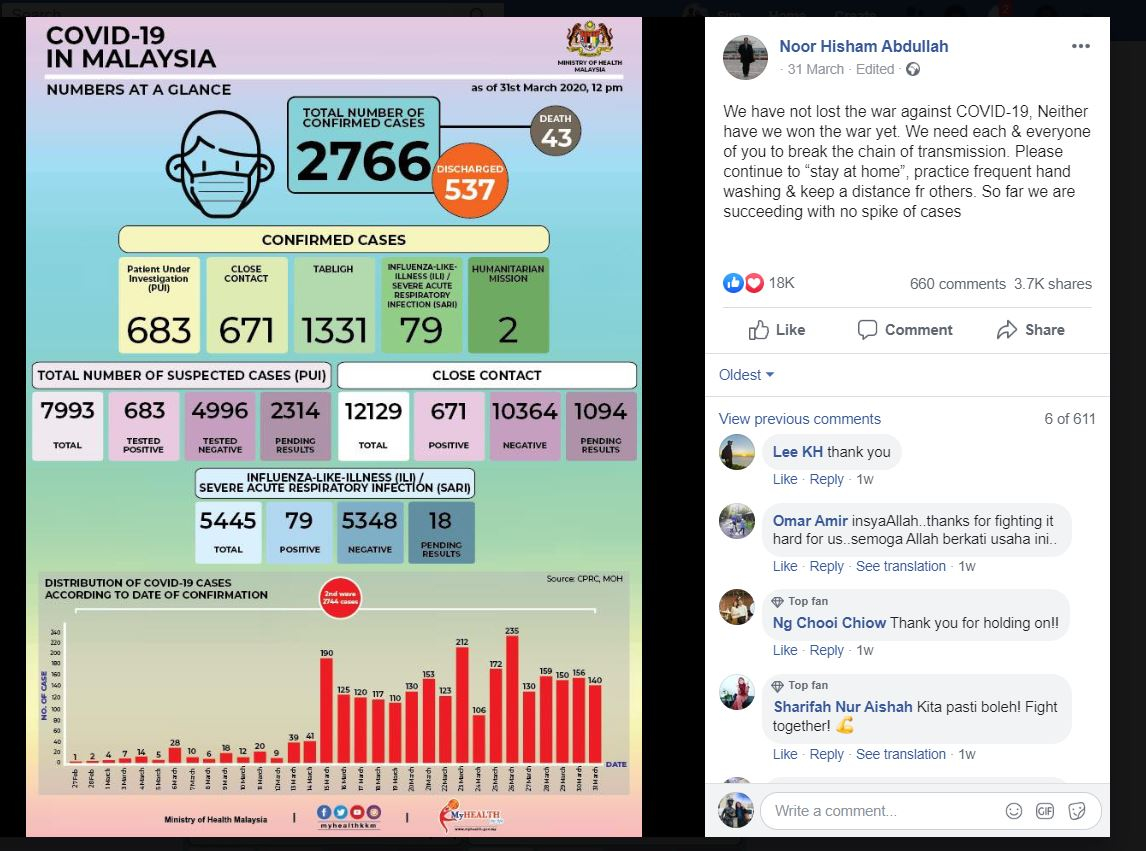 “Every time I see health director-general Dr. Noor Hisham Abdullah, I feel reassured. The man has been a tower of strength for many Malaysians,” journalist A. Kathirasen wrote in a glowing commentary in Free Malaysia Today, calling him a “trusted face” and “a bulwark against confusion.”

This is in contrast with government members in Malaysia who have attracted ridicule for some of their advice, including Health Minister Adham Baba who suggested last month that people drink warm water as that would help kill the SARS-CoV-2 virus.

In New Zealand, Health Minister David Clark was demoted last week after twice breaching lockdown measures to go cycling and go to the beach with his family.

Meanwhile, U.S. President Donald Trump has peddled half-truths and repeatedly made false promises about testing and cures for COVID-19.

With politicians falling short, people have turned to Hisham, Bloomfield and Fauci as the adults in the room and the go-to people for reliable facts and information.

It helps that all three are actual medical doctors, with the requisite “Dr.” in front of their names, and true experts in their fields.

Fauci has led the NIAD since 1984, advised six U.S. presidents, and battled previous epidemics such as HIV/AIDS, Zika and Ebola.

Hisham has been Malaysia’s director-general of health since 2013 and continues to work on the side as a senior consultant breast and endocrine surgeon at Putrajaya Hospital, near Kuala Lumpur.

Bloomfield worked in hospitals in the UK and New Zealand before joining the health ministry and also spent time at the World Health Organization in Geneva. 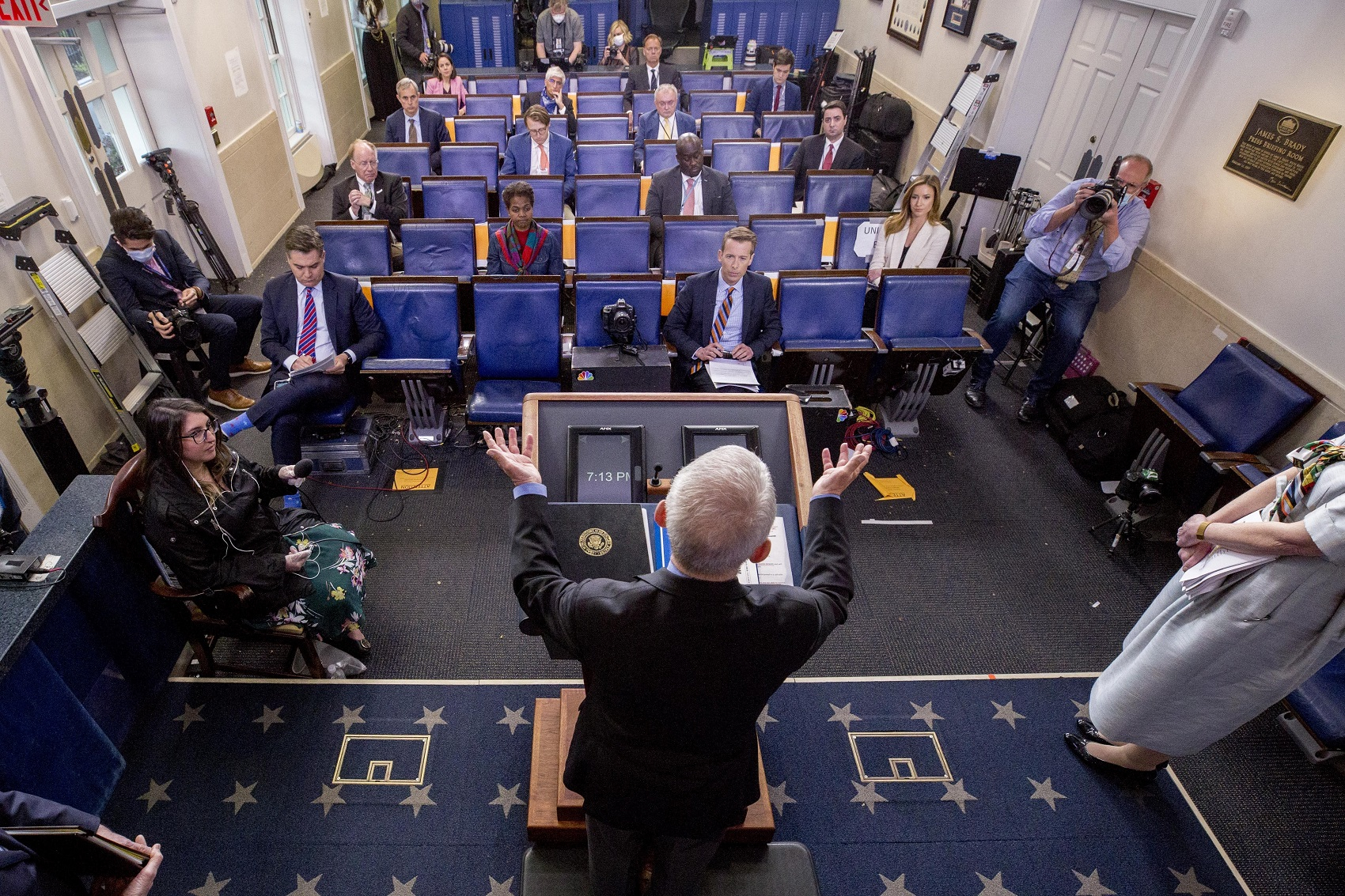 Aside from their expertise, they have impressed with their hard work. Fauci has notoriously worked 16-to-18-hour days for the past few weeks, giving interviews on every network available. Hisham posts updates on his Twitter and Facebook accounts late into the night and has been growing visibly tired, prompting dozens of messages from his followers to “please take a rest.” New Zealand newspapers ran headlines last month noting: “Ashley Bloomfield is Finally Having a Day Off.”

Blunt without being alarmist, the three men have consistently focused on the facts. Not overburdened by policy decisions, their message has been clear throughout. And online comments have shown people appreciate their directness.

“Let us look into the data, the data will tell us whether we need to extend (stay at home measures) or not,” Hisham characteristically told a briefing earlier this month. “I can predict, but the reality is that we have to base on science and facts.”

People have found comfort in Fauci’s distinctive Brooklyn accent, in the regularity of Bloomfield’s briefings – held like clockwork at 1 p.m. every day – and in Hisham’s daily updates on social media.

Just how much people have come to rely on them shows when they are not sighted for 24 hours or more. Every time Fauci has been absent from a White House briefing, it has prompted online panic over whether he has been fired after – once again – setting Trump straight. 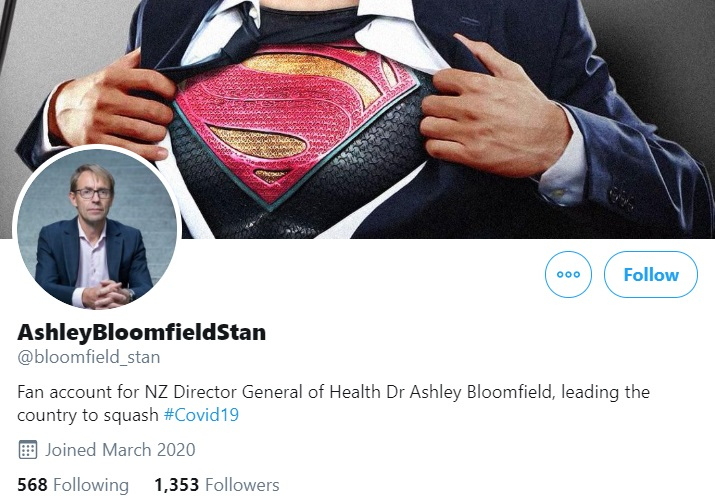 A low-key image and unassuming air have contributed to the men’s appeal: Hisham has swapped his usual suit and tie for a blouson jacket with the health ministry’s logo at his press briefings, while Bloomfield has been described as the quintessential civil servant.

“Nothing Ashley Bloomfield says is particularly remarkable. There have been no mic-drop moments or snappy zingers… He diligently and clearly answers reporters’ questions,” noted Slate writer Tess Nichol.

“Literally nothing about this messaging is exciting,” and yet this is exactly what people are looking for, she said, calling him a “mild-mannered health care hero.”

With half of the world’s population confined, bored and looking for a distraction, the trio’s performance over the past few weeks hasn’t just earned them respect, it has turned them into bonafide stars and matinee idols.

“Anthony Fauci Is America’s Coronavirus Crush,” The Atlantic titled a column last week, asking: “What is it about a crisis that can turn even a 79-year-old immunologist into a heartthrob?” 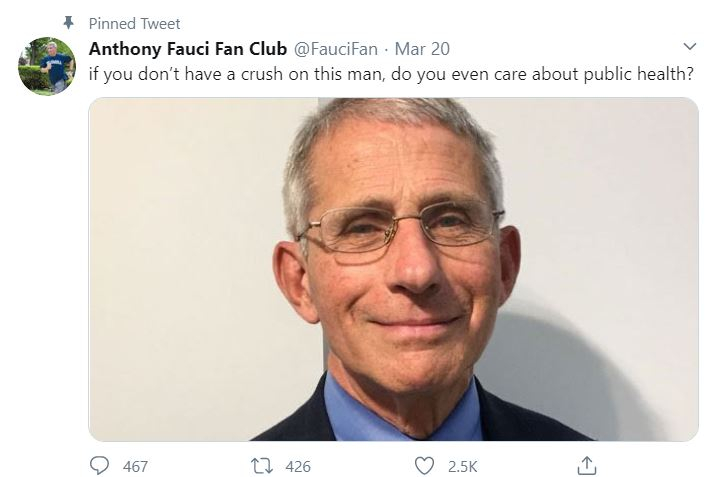 The New York Times called him a “national treasure” and close to 15,000 people have signed a Change.org petition to get him voted People Magazine’s Sexiest Man Alive for 2020.

In New Zealand, a local columnist who jokingly changed her Twitter name to “Ashley Bloomfield Fan Club” reportedly saw her number of followers balloon almost overnight, while Slate described the health director-general as “an unlikely heartthrob” and “rockstar” who has “New Zealanders’ hearts aflutter.”

Fan accounts have been created in Bloomfield’s honor on Twitter and Facebook, and a petition is trying to get him voted New Zealander of the Year.

Hisham’s fans have been more restrained but his Facebook posts are followed every day by dozens of “thank you” notes and messages calling him a “warrior,” an “inspiration,” and a “true hero,” and at least one user wrote “I love you so much Datuk,” addressing him by his honorific name, followed by several hearts.

In perhaps the greatest tribute yet to a top public health official however, a donut shop in New York state began selling pastries with Fauci’s picture on them last month and has been doing brisk business ever since.

“I never met a guy that worldwide he is so loved,” the shop’s owner Nick Semeraro told CNN. “And a month ago, we never knew his first and last name.”